The Plague of the Zombies

The British film studio Hammer is notorious for making low-budget films in the same vein as Roger Corman: inexpensive; quickly produced; made in an assembly line fashion. 1966’s The Plague of the Zombies is no different. I remember seeing this years ago at the video store and taking a chance on it, especially since the word zombie is in the title. Unlike the zombie films that arrived on the horror scene following George A. Romero’s seminal 1968 film Night of the Living Dead, The Plague of the Zombies follows the formula used for zombie films of the pre-Romero genre – blaming the rise of the recently deceased on voodoo.

The plot follows Sir James Forbes (Andre Morell), a distinguished gentleman doctor visiting a small English town to assist former star student Dr. Peter Tompson (Brook Williams). Accompanying Forbes is his only daughter Sylvia (Diane Clare), who is outspoken, especially for the time the film is set in (the late 19th century). After sending a team of extremely rude fox hunters off in the wrong direction, Sylvia incurs the wrath of these said men, who are connected to the evil squire Clive Hamilton (John Carson). Calling Forbes because of a rash of mysterious deaths, Tompson is in the middle of a mystery – and one that will eventually take the life of his wife Alice (Jacqueline Pierce). It turns out the squire had spent a great deal of time in Haiti and picked up some voodoo skills in his journeys. Essentially it’s like Indiana Jones and the Temple of Doom (without the children): Hamilton is killing the townspeople and using their corpses as slave labor. It’s up to Forbes, Tompson, and Sylvia to save the day, solve the mystery, and do it all in 90 minutes.

I caught the film on TCM and Robert Osborne states the film took only a month to shoot, which is interesting because the film looks great, even though it’s a cheap Hammer film. There’s something charming about the way these films are made; the lighting is great, the colors captured on film are very strong, and the shots aren’t bad for a low-budget production. I’m not saying The Plague of the Zombies is a revolutionary piece of cinema, but for a B-movie (literally, since it was the second film on a double feature according to Osborne) it’s great. It has all the plot hooks that make a movie like this flow well and keep the audience entertained. It also has a great deal of silliness and schlock to make any fan of bad movies laugh.

Beginning with the make-up, the zombies look like those in Romero’s 1978 Dawn of the Dead (blue), yet they aren’t as shiny as Romero’s zombies. They have a grittiness in their make-up, which looks a little like somebody pasted oatmeal on their faces. One inconsistency is the eyes of the zombies: some are vacant and white, some have pupils. I’m sure if the film wasn’t made on the cheap for a decent return profit this would have a more concise explanation like, “their eyes become white after a few days of being a zombie slave.” Yet since, like most Hammer productions, the mythology of the story isn’t fully developed, leaving it up to the audience to contrive their own explanations.

Another stellar piece of cinema stupidity takes place towards the end of the film. As Forbes is closing in on the squire and his band of evil fox hunters and zombies, a fire is started in the squire’s home, eventually spreading to the mine underneath his estate. When the zombies start catching, they pat their slave robes stupidly, not doing anything productive. Yes, they’re zombies and not very bright, but the movements were silly. Next, a zombie in the early stages of burning alive (if that word is applicable) comes crashing through the main room in the mine shaft and this is where the film becomes laugh out loud funny: the stuntman is wearing a zombie mask that’s beyond obvious. It’s something Mystery Science Theater 3000 would have a field day with. Moments like this fill the last few minutes of the movie, where a fight between Forbes and the squire takes place and a good deal of stabbery leads to the protagonists saving the day.

Brook Williams’ acting is another topic that needs exploration. I know it was the ‘60s, but the level of shit in his performance makes a septic tank seem like Nag Champa. When Williams’ wife Alice dies about 45 minutes into the film, his reaction to the news is so overdramatic that I died laughing. It happens twice in the film: first when he finds out and next when he sees his dead wife’s body. Even William Shatner at his worst isn’t this bad. Only something out of an Ed Wood film or Manos: The Hands of Fate is worse. I don’t enjoy wishing bad things on people, but Williams’ acting career should’ve stopped here, since he obviously has no idea how to act and exhibit any real emotion.

Finally I’d like to explore the racial issues in The Plague of the Zombies. Aside from featuring a few black men as house servants, with the personality of a block of wood, the way the filmmaker’s survey voodoo exhibits a feeling of cultural superiority and contempt for Haitians and their beliefs. While this is the case in most zombies movies prior to Romero’s re-launch of the undead, The Plague of the Zombies does it in a fantastically racist fashion. By treating voodoo as an evil, the film argues that voodoo is a practice performed by a black population that is subpar in comparison to the British. The squire’s implementation of voodoo also states that white people have a certain amount of control over the residents of Haiti. Since the squire employs a few Haitians in his household for both domestic duty and voodoo rituals, it demotes voodoo to the status of a commodity. Instead of being a religious tradition performed and believed by a group of people with a rich sense of culture, it’s something the white man can usurp for profit; in this case for gathering the dead to dig up a mine. It reduces voodoo to a capitalist practice, and a practice that’s evil too. So Hammer has exploited voodoo to not only show Haitians as a population of evil individuals but also that their spiritual beliefs are lowly enough for white exploitation. It’s cultural hegemony at its finest. All the film needs to be more racist is a white guy in black face. 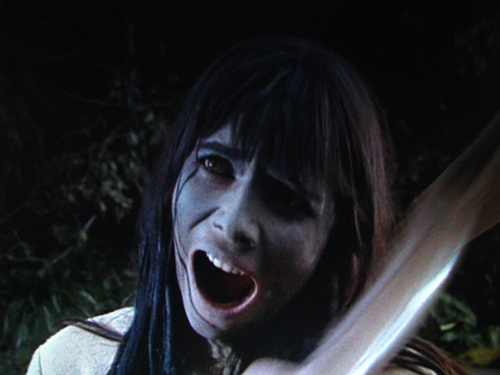 All the critique aside, I enjoyed watching The Plague of the Zombies again. Yes it’s racist and cheap, but it’s take on female independence is somewhat progressive. Yes Sylvia does need men to save her, but her attitude towards those who attempt to capture her is strong. Physically she’s outnumbered and overpowered by her male captors in the first 30 minutes of the film, but her resolve is not shaken. She asserts herself with confidence, even when the situation is not to her advantage. I have to admit I like this. Even though it’s racist, the film is fun. It takes a simple idea like slave labor zombies and turns it into something enjoyable to watch. It has the same feel as the other Hammer films of the era; it’s playful, yet trying to be scary at the same time. Yet it can’t be too scary – these films are made for kids to watch on a Saturday afternoon. That’s what’s great about the Hammer films of the 1950s and ‘60s: they’re spooky but not really scary. They’re like comic books and like most comic books of the era, a great deal of Western cultural superiority is asserted but for the expense of fun. While I can’t condone the sentiments of the film’s producers, it’s cheap fun nonetheless.