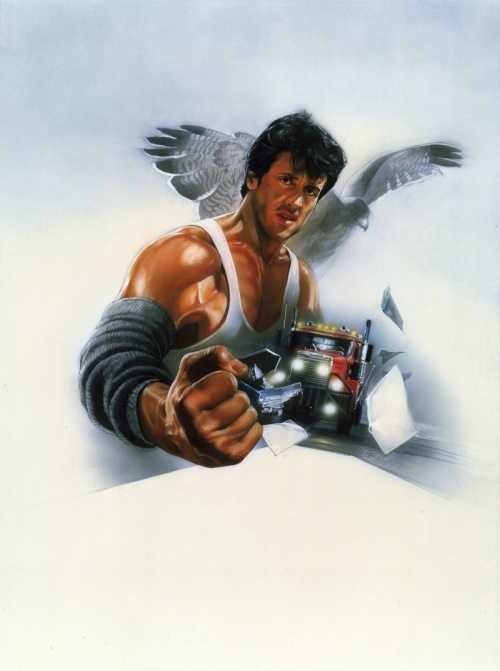 Stallone walked into a Warner Brothers office and said he wanted ten million dollars to make a montage of constipated faces with Sammy Hagar’s latest abortion playing behind it. They gave him 25 million and said to wrap a loose story around it. The result is Over the Top, a film about the high stakes world of competitive arm wrestling. Since the MPAA wouldn’t give a PG rating to a film about harrowing bowel movements Stallone used the “sport” as a vehicle for his ambitions – showing the most absurd action faces in film history. I’m honestly not sure whether it’s asinine or art, poking fun at the hyper-bravado inherent in the average American male.

Below is a selection of screen captures I did this afternoon while watching another Stallone movie: Rocky III, featuring Mr. T and Hulk Hogan as Thunderlips. It’s the first time I’ve had a free afternoon in quite a while and I’m sharing it with you, dear reader, in the hopes that these pictures from Over the Top become a desktop background somewhere.

Why not start here: a picture of Stallone’s nemesis. This bald trucker sometimes dons a cap for the Las Vegas Jail – obviously he’s not somebody to mess with. This man delivers some incredible action faces, indicating a log of about 12-14 inches in length and almost that much in width. Below is another example:

I didn’t realize Jimmy “Superfly” Snuka ever appeared in a feature film, even if this isn’t Snuka. Nowadays Snuka looks like another full-time crack head but in the ‘80s he was merely a coke head. This imposter looks like the rock has already enrolled him in a 401k of despair, homelessness, and addiction.

This tub of lard is celebrating passing a healthy bowel movement consisting of McRibs and Milano cookies. I’d be this excited if I was in a similar position and hadn’t defecated in almost a week.

Now we can’t forget Stallone himself, a man capable (on many occasions) of exhibiting the best action face this side of Schwarzenegger. This actor and horrible writer/director was made for such a film, proficient in both constipated faces and believable testosterone charge grimaces.

This picture captures Stallone in mid-release, possibly with a vestige of his waste crowning. Here Stallone admirably pulls it off, demonstrating why he’s earned his position in the upper echelon of bad action stars.

In this picture Stallone has finally released, his sphincter flesh coaxing the turd into the bowl. Now that the dropping has vacated the protagonist his face can contort back into a default position, awaiting a second battle with his porcelain adversary. 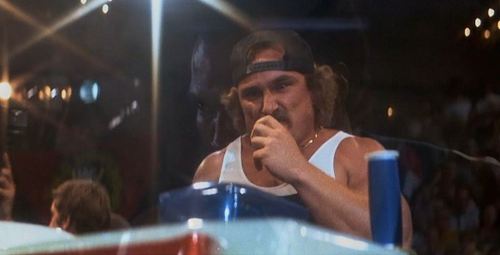 This competitor, deeply meditating on his current discharge, I call “The Thinker.” He’s the man who reads Kant or possibly Steve Jobs’ book on the john. I’ve heard this leads to hemorrhoids. The next picture indicates this hypothesis might be true. 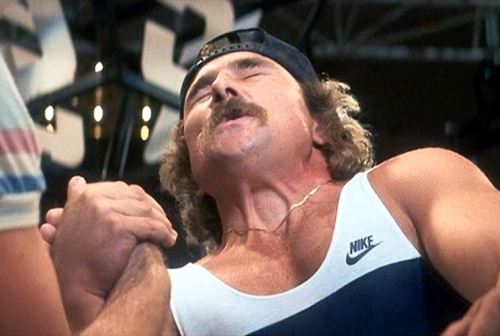 Like the man above this next contender is a thinking man, a man of both action and words. His muscles are big, his intelligence is high, and his action face is well defined.

Product placement in Hollywood movies is nothing new but why would a professional arm-wrestler/shitter wear this shirt unless this is really a bowel movement contest?

Then there’s this shirt. I’m not entirely sure why it’s there and what is “awesome” about it; it’s a terrible shirt and only serves ironic wardrobe purposes. Regardless, I found it hilarious and a perfect example of Over the Top’s mediocrity.

Finally, the award for best constipated look goes to this guy and he’s not even a competitor. Nonetheless, his action/shitting face is beyond compare, beating out even Stallone. Whoever you are: congratulations.

This entry was posted in Movies and tagged arm-wrestling, bowel movement, constipation, Over the Top, shitting, Sylvester Stallone, Terry Funk. Bookmark the permalink.