When I first saw the previews for Captain America I could help but exude excitement – a super hero period piece? Hell yes! However, two and a half hours and one bag of popcorn later I can’t say the excitement has transferred. Captain America is a thoroughly mediocre piece of cinema, relying on computer generated action, sappy storytelling, and the weight of Marvel’s reputation to carry it. That doesn’t mean there weren’t a few decent moments or I was bored throughout the entire screening but overall I couldn’t help but find Captain America pedestrian and actually a little bit vulgar and offensive.

**Warning: There are spoilers ahead.**

The Plot and it’s Pro-War Leanings

The film begins in the present with a team of American scientists discovering a mysterious looking aircraft in the Arctic. After cutting into the ship’s hull and entering they find a piece of Captain America’s costume. From there the film reverts back to the early days of the Second World War and we meet Steve Rogers (Chris Evans), a puny man from Brooklyn desperate to join the military and battle the Nazi’s. Rogers claims he doesn’t like “bullies,” citing this as his reason for desiring combat. Since he’s a fragile looking man the military rejects him. Later that night he meets up with his closest friend, Bucky (Sebastian Shaw), who is shipping out to England the next day and they go on a double date to a modified version of the World’s Fair. There we’re introduced to both Howard Stark (Iron Man’s father, played by Dominic Cooper) and Dr. Abraham Erskine (Stanley Tucci), the head of a covert military experiment to create a super soldier. As is already obvious, this chance encounter with Erskine changes both Rogers and the world’s destiny. 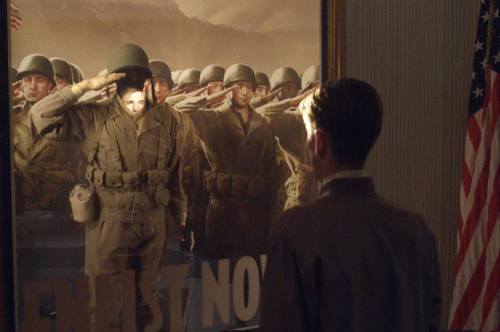 Shortly after the before mentioned events Rogers is turned into Captain America through a mixture of a secret serum and exposure to some kind of special rays. He enters into a tube a skinny man and emerges looking like a professional wrestler with a ‘40s haircut. Erskine is assassinated immediately following the experiment and Rogers’ confrontation with the assassin leads to the public’s knowledge of America’s new weapon. Opting to avoid confinement to a laboratory, Rogers becomes Captain America and becomes a symbol used to sell war bonds and pro-American propaganda (he stars in his own line of films and does U.S.O. shows). Eventually Rogers ends up in Italy, learns of Bucky’s capture, and launches a daring rescue mission behind enemy lines which catapult’s him into a position of authority. From here on out it’s an action packed piece of Hollywood fanfare with Captain America fighting against Red Skull (Hugo Weaving).

While the rest of the world is off fighting Hitler and the Nazi’s, Rogers is off fighting a super secret branch of the Third Reich: Hydra. From what I gathered they’re a scientific branch of the Nazi military and look into old myths and religious tales for weapons. They discover one which can harness the “Power of the Gods,” and this turns into a laser which destroys people instantly. Honestly, it’s not that great of a weapon (it emits a blue laser blast which disintegrates its victim) and I was expecting more.

I’m not a big fan of war films, especially those glorifying battle, and Captain America does just that. Honestly, I have no idea why I was expecting anything else, especially only a few months after Osama Bin Laden’s death. Captain America is a feel-good American film glorifying the sacrifice of countless men during World War II and demonstrating how America can triumph over others. The American characters are given a decent amount of development but the enemies are one dimensional and therefore devoid of empathy. I’m not saying they should be deep, and therefore sympathetic (after all, they are Nazi’s), but this kind of storytelling doesn’t do anything but further any course of action other than bloodshed. Once again, what should I expect from a super hero’s whose sole function is eradicating America’s enemies?

Watching Captain America, and witnessing the demise of young Americans on the battlefield, brings to mind Ken Burns’ extremely long PBS documentary The War. I’m not a big Burns fan (I thought his Civil War was long and boring) but something about The War was captivating. Maybe it was the use of old footage; maybe it was the interviews conducted with the men and women affected by the war; maybe it was the way Burns created tension and anxiety right alongside happiness and hope. There are moments in The War where everything comes to a standstill only to be brought back by the sounds of guns and bombs – a jarring technique. The idea of people dying in battle, especially considering the last few blunderous conflicts America has engaged in, really isn’t something I find appealing. However, if you’re looking for a film which glorifies war and countless deaths, Captain America will weasel its way into your heart as it has both in spades.

The Dialogue and Plot Points

Like any movie reaching for a mainstream audience, especially one comprised primarily of children and teenage boys, Captain America features a few points of familiarity which come up occasionally in the film. When Rogers is still a scrawny young man it becomes apparent he has no luck with women (and even less familiarity with them). Rogers’ interactions with SSR officer Carter (Hayley Atwell) betray a sexual tension between the two, using Rogers’ unfamiliarity with dating and dancing to create a common link. For the rest of the film Rogers’ awkwardness with the opposite sex and his lack of dancing skills becomes a commonality for the male and female protagonists. Unfortunately, the delivery of their dialogue and the dialogue itself is completely insipid, rendering the connection between these two uninspired and boring. I couldn’t find myself interested in their relationship and didn’t lament one bit over their separation near the film’s conclusion.

Another recurring piece of information involves Rogers’ sense of justice. Early in the film it’s pointed out that Rogers has been the recipient of many beatings by neighborhood bullies and during one scene where a loudmouth at a movie theater punches him repeatedly the protagonist claims (and this might not be verbatim): “I can do this all day.” This comes up later in the film after Rogers’ transformation into Captain America when fighting Red Skull and it doesn’t really impart a feeling of urgency towards the character. The only positive associated with Rogers’ weakness before his metamorphosis comes from Dr. Erskine who claims, ”a weak man knows the value of strength, the value of power” – a line demonstrating thoughtfulness over issues of power, brute force, and morality. Like the old adage, “Absolute power corrupts absolutely,” (attributed to Lord Acton) Erskine’s choice demonstrates he’d contemplated the application of his research. Much like the late Neil Postman’s idea (proposed in Technopoly) that the creators of a technology aren’t always the best judges of its applications; Erskine’s moral leanings demonstrate that he’s concerned over the uses of his work – one of the only sound ethical moments in the entire film. 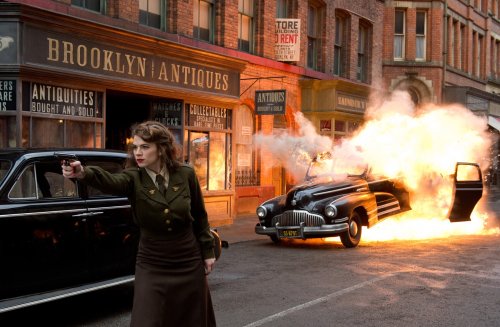 Erskine’s actually the only real moral character in the whole film – and he dies in the first act. Early on in the film he states (and again, this is not verbatim), “remember, the first country the Nazi’s invaded was Germany,” which denotes the characters abhorrence towards the Nazi’s isn’t based on state propaganda; instead it’s based on a sound moral compass. The rest of the characters act primarily based on propaganda and national symbolism – even Captain America’s shield carries America’s chief symbol. Unfortunately, a film which could’ve been both a great action piece and a commentary on aggressive militarism is simply just a piece of high budget propaganda.

One of the marvelous aspects of Captain America is the absence of product placement and integration. It’s difficult to sell cellular phones and other such products in a period piece; unfortunately, the filmmakers figured out how to by having miniscule portions of the film take place in contemporary times. After the Arctic discovery Captain America, who I’m assuming was frozen after the crash, awakens in a recreation of a 1940s hospital room. There’s an old baseball game on the radio which gives away the ruse and Captain America forcefully escapes, ending up in Times Square amidst a sea of advertisements. His disorientation is apparent and this isn’t surprising considering corporate America has no shame – there are ads for Wicked, chewing gum, other movies, and countless other products I can’t remember off the top of my head and I’m sure these various companies paid for inclusion in the film.

It’s at this point, sitting in the theater and ready to exit, that I came up with a great idea for the second Captain America. If the first film has Captain America fighting fascism of the Nazi variety why can’t the second film have him fighting fascism of the corporate kind? I tried placing myself into the protagonists head and imagining what it would be like to awaken 70 years after World War II and finding my hometown littered with countless advertisements for products – it was a thought which I found repellent. I couldn’t help seeing it as an invasion of New York, a hostile takeover reaching far beyond the boundaries which existed during World War II era America. Of course Times Square has always been a scene of commercialism, with billboards telling people to purchase various products but the methods used by corporations in 2011 would seem quite alien to somebody coming from the 20th century’s first half.

My proposal is this: Captain America takes down Lehman Brothers, Chase Manhattan, and any other financial institution which had a hand in America’s economic downfall. Instead of letting bankers and their greedy associates get away with stealing billions from our nation, Captain America whacks them quite hard over the head with his special shield and brings them to justice. Who knows, maybe the third film will feature Captain America going after pharmaceutical companies for aggressively marketing useless and dangerous products to Americans under the guise of benevolence? There can be a whole line of these films, each with a different corrupt sector of America’s private sector coming under Captain America’s wrath. Oh, if only Marvel would actually make a product which showed the American people that these various institutions don’t have our best interests at heart and there’s a hero willing to take them down a peg.

I won’t hold my breath.

Here is the trailer: