Yesterday I picked up Dawn of the Dead on DVD for $3 – funny how it took me this long. I saw it in theaters in 2004 and have rented it at least three times since. Why it took me so long to purchase it is beyond me (I probably didn’t want to pay $15-$20). Although I hate Zach Snyder I really feel this film is excellent. Below are my thoughts on the film seven years after its theatrical run. I am typing this while watching the movie so it’s possible this post will be quite scatterbrained but at least it’s chronological.
END_OF_DOCUMENT_TOKEN_TO_BE_REPLACED

The CDC isn’t a fire burning time bomb. Also, just ducking when a building blows up doesn’t really do anything, especially when the bomb is a pseudo-nuclear weapon. Am I willing to suspend my disbelief and go for an entertaining ride? Yes. However, I don’t enjoy visual media blurring the line while demanding empathy, riding melodrama into cheap sentimentality. The season finale of AMC’s The Walking Dead did just that. That doesn’t mean there weren’t great moments or that I didn’t enjoy the episode, but I understand why writers were fired.
END_OF_DOCUMENT_TOKEN_TO_BE_REPLACED

“You got one choice boy: sex or the saw!”

I don’t think its fair comparing The Texas Chainsaw Massacre II to the 1974 original – they’re different beast’s altogether. Even though Tobe Hooper directed both, each film has its own feel. The second film is based on the original and even contains many of the same characters, but it approaches similar subject matter quite differently. Hooper’s original is disgusting, but not because of overt visual violence but because the psychological brutality the cannibalistic family inflicts on Sally, the film’s one survivor. The Texas Chainsaw Massacre II isn’t nearly as torturous, instead placing gore effects in Tom Savini’s capable hands and relying on bloodshed and completely bizarre, and darkly comedic, situations. For all its grizzly violence, The Texas Chainsaw Massacre II is a comedy – very dark and sadistic comedy.
END_OF_DOCUMENT_TOKEN_TO_BE_REPLACED

So I’m going to start my essay about episode 5 with a minor rant. I hope this doesn’t detract my piece, but, as a reader of the Walking Dead comics, I feel it necessary. The show is riffing along a different tangent at this point, taking elements from the comics, shaping them into a different beast altogether. This isn’t a bad thing. For a devoted reader it gives suspense. Nothing is predestined at this point and anything’s possible. Am I one of those people who dislike when liberties are taken with a quality text? Yes. Do I condone and even enjoy when liberties are taken? Yes. It’s not how unfaithful an adaptation is, it’s when the integrity of feeling of the original source disappears, like Robocop 2 or 3 being devoid of Paul Verhoeven’s dark brand of social comedy. A faithful representation isn’t important; it’s capturing what the original manuscript imparts. Any adaptation demonstrating this sentiment seems valid.
END_OF_DOCUMENT_TOKEN_TO_BE_REPLACED 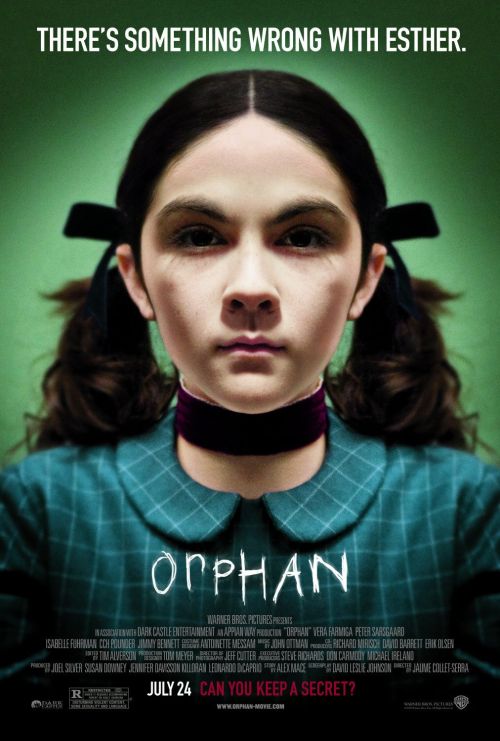 Justin recommended Orphan the other day. I wasn’t jazzed on the idea – a movie about an evil little orphan, adopted by an upper middle class white family doesn’t seem like a winner. It’s released by Dark Castle Entertainment, the studio responsible for Ghost Ship and the House on Haunted Hill remake; not a company that bolsters confidence. Faced with limited option at the Redbox, we picked Orphan. We expected a feminine take on the mediocre Macaulay Culkin/Elijah Wood film The Good Son. Instead we received a great horror/thriller, complete with unpredictable twists, albeit a bit far-fetched, that was genuinely frightening and well made.
END_OF_DOCUMENT_TOKEN_TO_BE_REPLACED

At least I can say The Walking Dead series celebrates cultural diversity, even if a diverse racial medley embraces American stereotypes. This episode, called Vatos, features a Latino group holing up in a warehouse. When Rick, Glen, T-Dog, and Darryl trek back into Atlanta looking for Merle and a bag of guns, a run-in with the “vatos,” leads to a hostage situation and a stand-off. Instead of the situation culminating in bloodshed, Robert Kirkman’s teleplay reveals another humane survivor group – the “vatos” are maintaining an abandoned nursing home, looking after the elderly and indigent. Their tough exterior gives way, Rick donates some weapons, and a kidnapped Glen is released.  Here Kirkman’s episode demonstrates a positive outlook towards humanity; unfortunately it’s the last moment of stability the episode delivers.
END_OF_DOCUMENT_TOKEN_TO_BE_REPLACED

The other night I went to see Child’s Play in the theater. Originally released in 1988, it took me 22 years to finally check it out. The print exhibited was the first one made from the master copy and had never been shown before, which is a nice treat. In addition to this little tidbit, I enjoyed Child’s Play. It’s not the best horror film I’ve ever seen and I’m not sure it deserves a long line of sequels or an upcoming remake, but it’s a decent, low-budget horror flick with solid acting and a few genuinely suspenseful moments.
END_OF_DOCUMENT_TOKEN_TO_BE_REPLACED