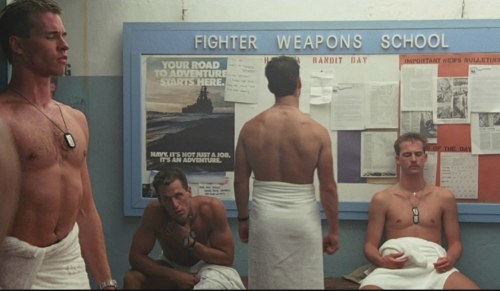 Even though I found this years ago I still think its funny – a re-cut trailer for Top Gun turning it into a homosexual love story. The film was already quite homoerotic before but now…

END_OF_DOCUMENT_TOKEN_TO_BE_REPLACED

My buddy Justin’s convinced A Nightmare on Elm Street 2: Freddy’s Revenge is a clandestine homosexual tale. I hadn’t seen the film since I was about seven or eight years old and don’t remember it being gay; then again, I was seven or eight years old and musings on one’s sexuality were a little beyond me. The other night I came across the film on one of the pay-per-view channels and had to determine for myself whether Justin’s assertion is correct. It is. A Nightmare on Elm Street 2 is probably the most homoerotic film I’ve seen in a long time – and this is coming from the guy that believes the subtext of Predator is a gay love story between Carl Weathers and Arnold Schwarzenegger. I’m not certain whether anybody will agree with my observations, but I’m definitely going to back them up with quotes from the film.
END_OF_DOCUMENT_TOKEN_TO_BE_REPLACED