Remember That Big Underground Complex From Day of the Dead? 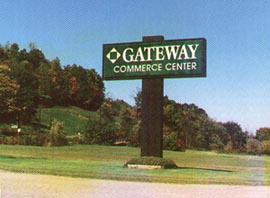 Arriving home from a pretty terrible evening I watched George A. Romero’s 1985 Day of the Dead. I picked it up on Blu-Ray a while back for $5 and hadn’t watched it yet and last night seemed like an ample opportunity. It’s not my favorite of Romero’s zombie films (although it’s better than Survival of the Dead) but Day has a special quality I can’t quite put my finger on. After watching the documentaries on the Day disc I found out why the film isn’t as spectacular as the first two: they didn’t have the money and Romero’s aspirations exceeded his budget.

One of the bonus features which grabbing my attention is a short promotional film for Gateway Commerce Center. Located outside Pittsburgh, Gateway is an old mine turned into an underground storage facility where Romero shot the film. It’s a very sterile, creepy looking kind of place. Below is the video from the disc, which is both interesting and kitschy.

Also, I feel it’s important to comment on my lack of posts lately: I’m moving to New Jersey and have been busy getting that together while also working to save up extra funds.