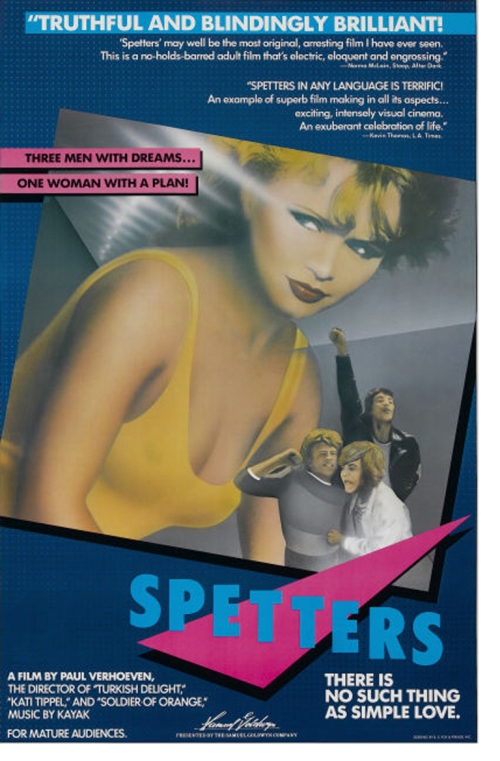 Spetters (when translated means hunks) is a coming of age story directed by the notorious Paul Verhoeven a few years prior to his entrance into the American film scene with Robocop. Following three friends – Reen (Hans van Tongeren), Hans (Maarten Spanjer), and Eef (Toon Agterberg) – from a small town in The Netherlands, Spetters explores both the world of motocross and finding out who one really is. It’s also a film filled with much sexuality and a good deal of homoeroticism. I’d never seen any of Verhoeven’s Dutch films before and after watching Spetters I can see not only why he made it to America (he can direct an interesting and visually striking film) and why he’s such a controversial director. 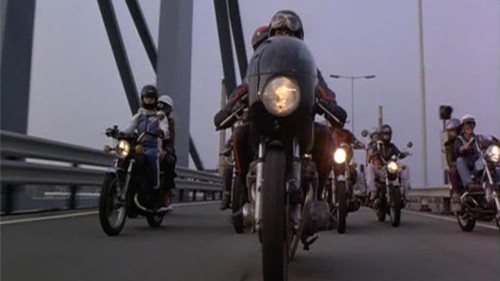 If you’re looking for cocks Spetters is the film for you. Not only is there gratuitous nudity but there is also a plethora of sexual activity. Aside from a sadistic gay rape scene, where a gang of men sodomize Eef in a subway tunnel, there’s a scene where the three male protagonists compare penis size, another subway scene where a male prostitute graphically performs fellatio, and a litany of heterosexual coupling scenes involving the protagonists and Fientje (Renēe Soutendijk). Spetters makes Showgirls look tame, even though I’m sure there’s more nudity in the latter but this doesn’t discount Spetters; it’s still an entertaining movie but it sometimes comes across as confused. Its obvious Verhoeven’s approaching the material from a realistic perspective but Spetters travels between comedy and tragedy on countless occasions – one moment somebody’s contemplating suicide and another there’s a giant pub fight resembling something from a silent movie. I thought the film was a comedy for the first 30 minutes until a tragic accident paralyzes Reen from the waist down, crushing his motocross dreams and sexual adventures.

The three male protagonists, although deep and multifaceted, aren’t entirely likeable characters. They show little respect for women and even physically abuse homosexuals. In his book on Paul Verhoeven Douglas Keesey claims Spetters’ “theme of sexual self-discovery through violation is problematic and opens the film to charges of stereotyping gays as sadomasochists,” and this statement rings true: Spetters does explore sexuality, especially homosexuality, through violence and physical force, not a deep contemplation of one’s place in the world. For the film’s first act I was thoroughly disgusted by the protagonist’s actions – degrading black people, physically abusing homosexuals, and treating women as objects and property – and it took a while before I could see the characters as anything other than little bastards. Even when the film concluded I couldn’t totally get behind them, feeling that their emotional growth wasn’t complete. Maybe it’s because I’m not a sadistic person but I’d avoid people like this in real life.

What really struck me as strange was the attitude the film takes towards homosexuals and the non-Dutch. When I was in The Netherlands a few months back I felt the place was very progressive, showing an open acceptance of homosexuality and minorities. Of course, like most European countries, there is negativity towards those outside the dominant ethnic group (like France’s anti-Muslim sentiments) but I didn’t experience this firsthand. The protagonists in Spetters regarded black people, Jews, and anybody not Dutch as suspect, ridiculing them or belittling their abilities. Amsterdam was one of the most progressive cities I’ve ever been to, and also very open towards homosexuals and lesbians, and seeing this side of Dutch life seemed strange. Maybe it’s because the film is over 30 years old; maybe it’s because I only saw what I wanted to see when in Amsterdam; maybe I’d notice it if I lived in The Netherlands for an extended period of time – I don’t know? However, I still felt the immaturity of Spetters’ main characters was ridiculous and it hindered my ability to get behind them. 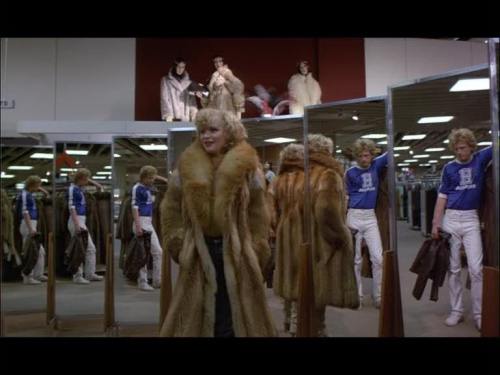 Fientje, the sexual object of desire in the film and the female protagonist, is another interesting character. Unlike many female characters in American films Fientje controls her sexuality, using it to her advantage on countless occasions. A woman like this, who has sex to get ahead, is commonly associated with the dregs of society but not in Spetters. While the male protagonists, who all desire Fientje, look upon her as property (and even see her as an easy woman) she is actually in control of most situations. Keesey claims, “Verhoeven is careful to present her character with a well-rounded ambiguity,” moving between being an opportunist and a caring person; it’s uncertain where he loyalties really lie but it’s certain she uses her sexual prowess to her advantage. Considering The Netherlands’ approach to sexuality, with prostitution being legal, it’s interesting to see how a sexually realized woman operates. I’m told a prime ingredient to Dutch prostitution is separating sex from love (an act I can’t really grasp) but the male characters in Spetters demonstrate their difficulty with this – they don’t always separate this properly when dealing with women who aren’t prostitutes. These men run the gamut between demonstrating actual caring and being selfish, decadent jerks. I think it’s this vagueness which makes Spetters such an interesting film.

In true Verhoeven fashion Spetters relies on excessiveness (this time its sexuality). When the film was released in The Netherlands it created quite the controversy and even incited an anti-Spetters campaign. It’s no surprise Verhoeven received recognition from America and made it over here only six years later and Spetters is a great example of what Verhoeven was up to prior to Robocop. Just remember, if you’re turned off by hyper-sexuality, homosexuality, and a barrage of penises you should avoid Spetters. I, however, don’t believe this discounts the film and the moments where a more tolerant attitude of others and homosexuality comes across make up for the quite blatant bigotry and selfishness.

Here is the trailer: