King of the Hill

Why am I enjoying King of the Hill so much? I’ve watching many episodes, mostly in syndication, over the years but lately I’ve been watching them on Netflix and it’s horribly engrossing. I’ve only been to Texas two times and although I didn’t stay around long enough to absorb all of this giant state’s color I feel I got a good feel for what the Lone Star State is like – it’s big, sometimes dirty, and people love Texas. Even though the “Don’t Mess with Texas” slogan was created for an anti-littering campaign it’s become the mantra of Texans; it also aptly describes the state’s population and the characters on King of the Hill.

It’s probably no secret I’m quite liberal; there are times I even think my viewpoints are a little too liberal (I’d like our electricity should be free and I’d gladly pay more taxes for elevated social programs). But when watching King of the Hill I can sometimes see Hank and his contemporaries’ points of view. Even though they’re sometimes misguided conservative crumb bums some of their viewpoints supersede the staples of their ideology. Hank believes in the American Dream, the Horatio Alger story, and defends it with aplomb – he’s assistant manager at Strickland Propane and maintains he arrived there through “hard word.” The problem with Hill’s ideas, and conservatism in general, is it doesn’t recognize capitalism is a game which can’t exist without the winners stepping on the losers in their uphill climb. Hank is the kind of person who believes welfare is for the lazy but doesn’t think about the conditions leading to poverty and its continuation.

Actually, Hank’s this way on countless issues – socioeconomics, homosexuality, crime, laws, etc. – only seeing things as black and white. However, as the show progresses Hank grows as a character. He doesn’t become a tree hugging liberal by the series’ conclusion but he’s more open to new ideas (he even likes chicken tempura in a later episode) and doesn’t rely so much on gut feelings. Instead he begins seeing the roots of an issue instead of looking at the surface issues which are predominately portrayed in the media. This doesn’t mean Hank discards his conservative, all-American ideology by the series finale but he changes from a semi-racist hick into a more understanding Texan.

Like Judge’s statements in the film Idiocracy, which assert people become stupid because they take the easy way out instead of relying on hard work and also don’t know the difference between right and wrong, King of the Hill espouses similar ideas: hard work and a well defined moral compass are the keys to leading a just life. There are times when Judge’s ideologies seem very narrow, and like Hank don’t look at the larger issues surrounding a situation, but I can’t help but think Hank’s right a great deal of the time. Maybe I don’t agree with how he arrives at his epiphanies yet he does reach sound conclusions operating in ethical parameters. Regardless of how Judge’s characters sometimes come across as racist, sexist, homophobic, or any other kind of bigotry, there are many examples of how these ideological barriers are shattered and new conclusions are reached. Like Eli Parisner argues in The Filter Bubble (and I’m paraphrasing here) people can’t learn and grow if they aren’t confronted by ideas which challenge what they already believe. 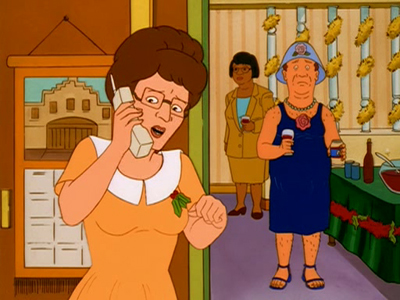 Hank’s neighbor, Khan, is a loudmouthed, materialistic Laotian who is one of Hank’s antagonists (aside from charcoal); Khan also operates as a symbol of Hank and his friends’ ignorance towards anything un-American. One episode, titled Won’t You Pimai Neighbor (about Buddhist monks looking for a lama), demonstrates Hank’s unfamiliarity with Asian customs and differences. When Khan holds a New Year’s party in April (celebrating Songkan) Hank, Boomhauer, Bill, and Dale all laugh at him and ridicule his party. When it turns out Hank’s son Bobby might be the lama he slowly changes his tune from “I can’t stop what you do at the airport (referring to Krishna’s),” to one of tolerance. Hank even starts investigating his own religious views (Methodist) even though he doesn’t drop all of his prejudices.

It’s also funny that Bobby might be a lama.

What really makes King of the Hill such a great show is how it’s sometimes a sad show. Many episodes end bittersweet, reflecting real life. There are some episodes which end joyously but overwhelmingly the shows end with inconclusively. Like life, everything can’t be summed up and this separates King of the Hill from other sitcoms. So many animated programs on today – Family Guy, The Simpsons – deviate from reality and King of the Hill is great because it rarely contains anything fantastic.

And then there’s Dale Gribble, Hank’s neighbor and childhood friend. He’s president of the Arlen gun club, he’s a conspiracy theorist, he uses a fake name for contracts and other official business (Rusty Shackleford), and his wife Nancy has been cheating on him for over a decade – and Dale’s oblivious to it (everybody else isn’t). Sporting an orange cap and exterminating bugs and rodents for a living, Dale is a loveable nitwit; he’s also the funniest part of the show. His son Joseph, clearly sired through Nancy’s infidelities with John Redcorn, a local Native American healer, doesn’t resemble him at all yet and when confronted with this he blames aliens; his basement is a panic room, filled with emergency supplies and all sorts of insanity. I’d watch an entire show about Dale.

So after over a dozen seasons King of the Hill was finally cancelled a year or two ago. The last few episodes didn’t even make it onto Fox and were only shown in syndication – it was replaced by the awful The Cleveland Show. I understand every good show has to end and King of the Hill is no exception; it’s possible the show could’ve turned sour at any moment, as happens constantly with television programs (look at The Simpsons, which has been on over 20 years and is just terrible nowadays). It’s good King of the Hill went out without travelling into the mundane and recycling bad plotlines and jokes but it’s a shame too since it seems obvious the show still had some pep left in it.

2 responses to “King of the Hill”