“You’re dealing with the Navy Seals.”

Navy Seals is Top Gun but less homoerotic and more cocaine fueled. After all, it stars Charlie Sheen (post Wall Street) as a self-absorbed, sociopathic Navy Seal who is amusingly racist (he calls the Japanese “Japs,” Muslims “rags,” and just about any other racial slur you can imaging). The film focuses heavily on mindless action and vaguely defined character traits – using the terms “good guys” and “bad guys” often and, like any good American propaganda made after the Cold War, its primary antagonists are Middle Eastern (Navy Seals’ main action takes place in Beirut, Lebanon). It’s the type of film which brings to mind Sel from Alejandro Jodorowsky’s The Holy Mountain, who makes war toys and begins propaganda campaigns against future enemies years before any actual conflict; it’s also a film undoubtedly fueled by massive amount of cocaine and excess. 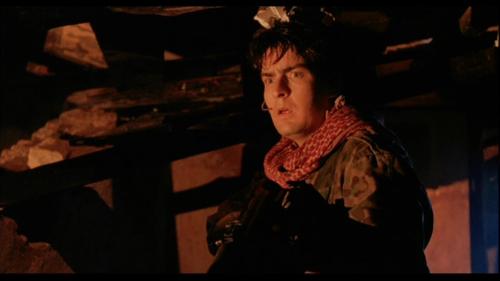 Even though Sheens star shines brightest Navy Seals is actually Michael Biehn’s (Aliens, The Terminator, Planet Terror) vehicle. Biehn plays Lieutenant Curran (remarkably close to Qu’ran isn’t it?), leader of an elite Navy Seals team filled with crazy, loose cannon, adrenaline junkies. Discovering a batch of stolen surface-to-air missiles, Curran sacrifices national security in lieu of saving lives and regrets it. Curran’s goal for the rest of the film is finding the missiles, criticizing the C.I.A. and America’s intelligence community along the way. He finally gets his wish, bringing his team to Beirut and a final clash with the main “bad guy,” played by Nicholas Kadi (Congo). Along the way plenty of inane antics ensue, usually prompted by Hawkins (Sheen): a loveable rogue and the most animated of the team. People die, people cry, and a shallow exploration of Middle Easter culture and America’s relation to the region rounds out this mediocre movie. However, like Fast Five, Navy Seals does not pretend to be anything more than its namesake – it’s a semi low-budget action film about Navy Seals.

While Navy Seals is a really fun action flick, rife with highly enjoyable but middling action scenes, looking past its propaganda and adherence to bad ‘80s action film tropes reduces it to comedy. Like so many films from this era, and working within the same genre, its well-worn conventions place it alongside the likes of the Delta Force and Iron Eagle series; even Top Gun has more legitimacy than Navy Seals. The characters are pretty much one dimension, protagonists and antagonists alike, except the “good guys” clearly exhibit sociopathic, and possibly psychopathic, behavior. Hawkins, during one mission, disobeys orders, kills a few hostiles (not because they are a danger but merely an inconvenience), and gets a teammate killed. In another scene Curran brings a love interest/possible informant out to a place called The Kill Room and potentially exposes her to a barrage of bullets – the Seals jump in, shooting the targets around the two, and then all the men laugh. Behavior like this is not benevolent – lack of concern for others being paramount here – and displays the Seals’ mental instability. Essentially, these characters are not role models yet the film, although R-rated, targets impressionable youths. 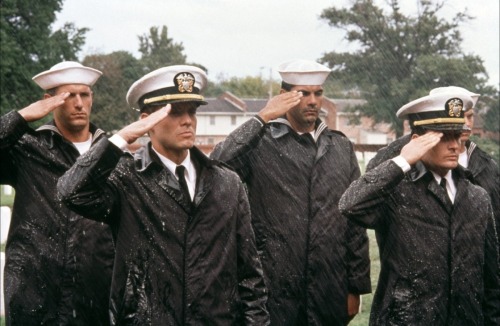 Like any good action film from this era Navy Seals is littered with both bad power rock (think Stan Bush’s The Touch from Transformers: The Movie) and overly dramatic exhibitions of winning. Here is an example, where Hawkins liberates his car from a tow truck:

Aside from the exuberant “Woo” (and the accompanying “Yeah”) Hawkins lets out towards the end and the bad music, this scene is also a prime illustration of the protagonists’ disregard for others. Sheen steals somebody’s bicycle, wrecks it, and endangers both the tow truck driver and other motorists. Like a heavy drug addict, Hawkins forsakes everything except himself and the rush; all others are expendable. With a little soul searching Navy Seals maintains Hawkins matures throughout the film and becomes a hero by the end and this comes off a bit weird, especially since Curran drives most of the story. It is almost like Biehn’s stiff performance and Sheen’s inflated ego changes the story’s trajectory, which is a shame since Biehn’s performances with James Cameron (especially as a deranged Navy Seal in The Abyss) demonstrate he is a competent actor when in the right circumstances. This change, which ultimately seems necessary, albeit stupid, outlines how insipid Navy Seals really is. It is a confused film, made for about $15 million dollars with the goal of turning a profit while forwarding America’s cultural hegemony – that does not say much about its credibility.

Navy Seals’ shoddy moments are another testament to its B-movie status, furthering the idea it was fueled by cocaine and excess. Imagining a group of coked out executives at Orion films giving over a moderate budget because Charlie Sheen and “that guy from Aliens” are attached to a Delta Force/Top Gun inspired propaganda film does not seem farfetched; its plot and simplistic world view denote absurdity instead. I cannot remember another film so cocaine charged – it’s almost like the advertisement ready We Built This City by Starship, where its allegiance to everything wrong with America and this era is on full display. The excesses and disregard for others; the penchant for churning out mediocrity because profitability is in its favor; the shoddy attention to detail – all of this takes center stage in Navy Seals.

The protagonists’ first introduction, during a mission, features a magnificent flub which sets the tone for the rest of the movie. During their evacuation the black helicopter says “Navy,” followed by a bunch of numbers on its side; for a covert operation they did not think a giant billboard announcing who is infiltrating the “enemy” was a bad idea? For a team which conveys to the rescued hostages, “We don’t exist,” it is satisfactory broadcasting that they do exist. Justin said it “blew his mind,” facetiously.

The helicopter scene is just one example of a substandard attention to detail, but it is not just this which is unbelievable; the actions of Sheen, Biehn, and their comrades really elevate Navy Seals to another level of absurdity. A golf course party, Sheen jumping off a very high bridge, the crew setting a bar on fire in memoriam of a fallen soldier, and others are utterly fantastic and destroy any gap between reality and fiction. Of course, film is where people go for escape but a certain level of realism, a degree of relatability, is necessary. Otherwise it is meaningless and avoids the human condition – an ingredient necessary for almost every story. Navy Seals, which is about humans, displays actions unreservedly unbelievable and avoids any exploration of humanity. When people do act this way they are seriously screwed up.

Leaving aside all the necessary and just negative commentary about Navy Seals, a few of the action scenes are entertaining. The climax, which features explosions, urban warfare, hand to hand combat, and a chase scene featuring a Mercedes and a heavily armed assault vehicle, is really fun – especially because Biehn delivers the best performance of the film as an injured soldier high on morphine. Most of the film relies on unintentional comedy for momentum but the films finale, except one moment, is captivating. The only transgression, and it is big, is the showdown between Hawkins and Shaheed (the villain). An underwater fight, controlled almost exclusively by Hawkins, culminates in a slit throat with no blood. What the hell? If you cut somebody’s jugular blood sprays everywhere and it should have looked like Omaha Beach. Combining the helicopter fumble and a bloodless execution transforms Navy Seals in a farce, a silly piece of cinema which instantly becomes a self parody. 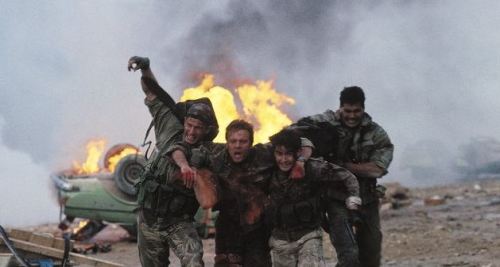 Director Lewis Teague (Cujo, The Jewel of the Nile, The Dukes of Hazzard: Reunion!) definitely churned out a golden turd here, contributing to the bad ‘80s action film canon with aplomb. It is a bizarre piece of American cinema: Sheen phones in his heartfelt moments and rides a cocaine wave through the film, Biehn attempts leading man status (and unfortunately fails), and Bill Paxton (as the sniper called God) is underutilized. Nothing really makes much sense outside of very pedestrian devices, furthering the belief Navy Seals is intended for an audience younger than R-Rated restrictions. In short, Navy Seals is a high budget recruitment film, depicting a bad-ass military life and ignoring all the horrors of warfare. Unlike Stanley Kubrick’s Full Metal Jacket or Oliver Stone’s Platoon (which also stars Sheen), Navy Seals glorifies war, even when it shows the casualties, which are depicted as noble sacrifices to America. 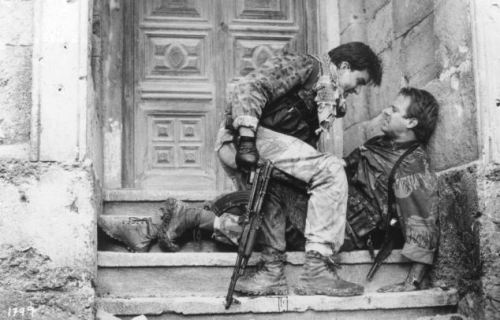 There was a brief moment when I pondered if Navy Seals’ secretly abhors warfare – when the realities of death seep into the narrative – but it is short lived. What emotion is shown is quickly erased by a furthering of national security and American intervention in international conflicts. The overarching message claims America’s military posturing and attacks are justified because everybody else is backwards – therefore necessitating our intercession. It’s like we know best and Navy Seals’ sense of superiority is its primary focus, furthering President Reagan’s idea of “Peace through strength.” See where that got us?