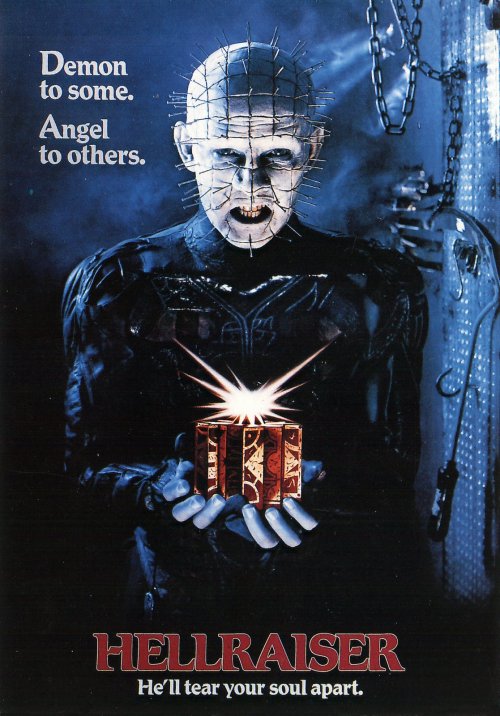 Last Christmas I purchased a Blu-Ray player and have been amassing a modest collection ever since. I’m cheap though; I won’t buy anything over $10, with the exception of Grindhouse and Machete (which was $12.99) since I’m a pretty chintzy bastard. Yesterday I perused Moviestop’s selection (a video flaneur if you like) and found a copy of the original Hellraiser for $6.99 new – how could I pass that up? A shitty horror movie from almost 25 years ago costing a little more than a pack of cigarettes: sure, why not? I haven’t seen Hellraiser in at least a decade and hadn’t revisited it because…well, because I haven’t really thought about it. I remember being obsessed with the first two films, for their bizarre representations of sexuality and their intense violence, in 9th and 10th grade but quickly outgrew them. Last night I revisited Clive Barker’s Hellraiser and was genuinely frightened, but for different reasons than intended.

The film begins with a shadowy man in a shadowy foreign location; a Chinese looking man asks, “What’s your pleasure,” and the movie’s antagonist Frank Cotton (Sean Chapman), purchasing an interesting looking puzzle box, sets the wheels in motion. This opening scene portrays Frank as a grimy character, with dirt entrenched beneath his fingernails, seen as he places large amounts of cash on the table for this highly sought object. The scene then cuts to a dark room with Frank knelling in the center of a candled square, solving the box’s riddle. When he does two hooks attached to chains fly out, ripping his flesh and we are introduced to the Cenobites: a group of demons who exchange heaven and hell’s pleasures for one’s soul. They destroy Frank, reducing him to tiny pieces and disappearing back into the box shortly after reconstructing Frank’s face out of what little bits remain on the ground.

Enter Larry and Julia Cotton (Andrew Robinson and Clare Higgins), a yuppie couple from Brooklyn looking for peace and quiet in a suburban landscape (sounds like Beetlejuice doesn’t it?).  Immediately the couple’s estrangement is obvious and becomes even more apparent when Larry’s daughter Kirsty (Ashley Laurence) displays disdain towards her stepmother. Investigating their new dwelling, Larry and Julia discover Frank was recently living there (since the house is apparently family property) and a moving accident, where Larry slices open his hand on a nail, dripping blood all over the attic floor, is the catalyst for Frank’s resurrection and escape from the Cenobites. Apparently dropping fresh blood over the site of a Cenobite victim’s death revivifies them and this scene is particularly gross. 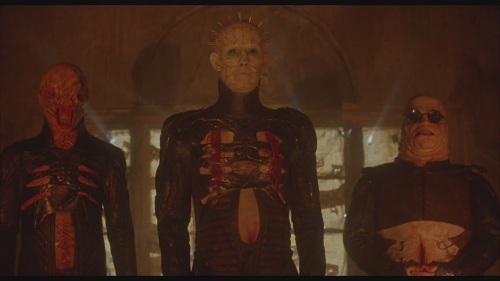 It turns out Julia and Frank had a brief affair and myriad flashbacks demonstrate this. Now that Frank’s returned, albeit without skin and in need of blood for his resuscitation, he enlists Julia to pick up men at bars, bring them home, and kill them. This goes on for a while until Kirsty discovers their secret, steals the puzzle box, accidentally awakens the Cenobites, and makes a deal with them (in lieu of her own demise) to give the escaped Frank back. From here the film gets a little silly and starts falling apart. What starts off as an interesting examination of human lust turns into a corny monster film with an unbelievable situation involving a character wearing another person’s skin, receiving all the physical sensations and what not. 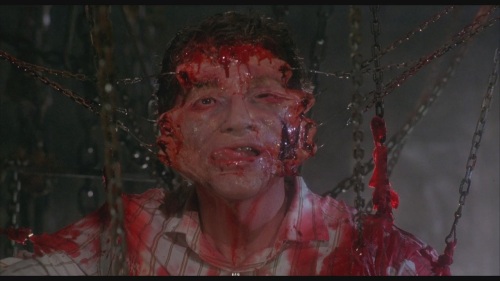 What director/writer Clive Barker captures in Hellraiser is a mood, a morbid ambiance that appears frequently throughout the film. While most believe Hellraiser is about a group of torturous demons, it’s actually more about lust and the similarities/differences between pleasure and pain. The film focuses more on Frank, Larry, Julia, and Kirsty than the Cenobites, leaving Pinhead and his ilk in the background. I felt the bizarre love triangle (no New Order pun intended) between Frank, his brother Larry, and Julia very interesting and the most fascinating part of the film. Naturally the Cenobites are necessary for the story’s agency but they become a secondary fixture until near the film’s conclusion (which is where the movie begins falling apart and enters mediocre territory). This tale of obsessive passion, of moving past the prescribed limits of physical and psychical love, is much more engaging than the monsters. In essence, it demonstrates humanity’s tendency to become the monsters of fable, overshadowing anything a supernatural being can accomplish.

In all reality the Cenobites aren’t actually very biased, appearing as impartial advocates of pain and pleasure. Towards the end of the film they begin demonstrating a personality (albeit a limited one) and this is where the film becomes trite. When the Cenobites begin chasing Kirsty their indifference disappears and the Cenobites, once just the arbitrators of heaven and hell’s sensations, become the monsters. I really enjoyed their lack of concern for the affairs of humans, instead only interested in dispensing sensations and doing their duty – arriving when the puzzle box is solved. When Barker changes their motivations the movie falls apart.

Hellraiser also demonstrates how people placed in extreme situations will show their true colors. When Kirsty’s confronted by Frank and the Cenobites she becomes a strong woman, not the ambivalent daughter who shows her distaste for her stepmother but also doesn’t just stand her ground. Under attack from her incestuous uncle or the Cenobites, Kirsty becomes a focused fighter, doing whatever she can to survive. Julia is another example of this, engaging in murder for the sake of lust and demonstrating a violent and selfish streak. Larry, who is confronted by many situations, approaches the world like a lost lamb, especially during his demise (which isn’t shown but Barker’s editing indicates Larry walks to his death like a lamb to the slaughter). Unfortunately, the film’s ending, especially Kirsty’s confrontation with the Cenobites, relies on stereotypical horror tendencies and becomes silly. It’s a shame too since the films first two acts are excellent.

The most terrifying aspect of Hellraiser is the feeling it left me with: anxiety. Watching these characters either masking or acting out their desires made me realize how fleeting life is and approaching it from a reserved perspective is a waste of time. That doesn’t mean one should discard regard for others but one also shouldn’t dismiss their desires for the sake of anybody else. Maybe it’s Kirsty’s transformation in the film, Larry’s passivity, Julia’s overzealous lust, or Frank’s sociopathic addiction to physical stimulation, but for some reason I didn’t want to live like these characters. It’s possible the film is a warning – a cautionary tale about temperance, saying going to extremes is unhealthy. The only balanced character in the film, Kirsty, lives while the others perish by adhering too much to extremes. Then again, maybe Barker’s just an asshole, playing out his fantasies for the movie going audience.

Hellraiser is also followed by a mediocre sequel (also featuring Ashley Laurence), Hellbound: Hellraiser II, a third sequel (Hellraiser III: Hell on Earth) featuring Terry Farrell from Star Trek: Deep Space Nine and a Cenobite who shoots lethal CD’s at his victims. Basically, it’s a piece of crap that’s good for a cheap laugh in you find it on HBO or at a thrift store.