The Devil’s Rejects: probably one of the most sadistic films I’ve seen in a long time, and I just watched Henry: Portrait of a Serial Killer a week or two ago. Henry is indeed a sadistic film, relying on its low-budget grittiness for its biographical effect; The Devil’s Rejects is just as sadistic but Rob Zombie’s sequel to the atrocious House of 1,000 Corpses is like a slickly produced music video, relying on contemporary representations of the grind house and drive-in horror films for its visual representations but placing it into an MTV/Quentin Tarantino framework. Ultimately, The Devil’s Rejects is a well made post-modern pastiche of the original Texas Chainsaw Massacre franchise, I Spit on Your Grave, and the like. That doesn’t mean I didn’t like it, but I find watching Rob Zombie’s second feature film difficult. It’s an exercise in endurance – how much senseless violence and sadism can one take? 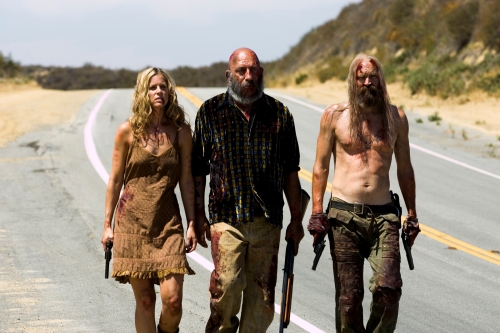 My biggest complaint about The Devil’s Rejects doesn’t come from the film itself but many of its fans. For some reason horror aficionados champion the film’s protagonists, seeing them as horror heroes. Zombie portrays as a macabre version of Easy Rider, looking for freedom through barbarity. I think they’re vile characters. Thankfully the film’s conclusion, at least to me, is a happy ending, even if Zombie gave them a hero’s ending. It was a catharsis, a releasing of psychical trauma endured through watching this movie. One of Zombie’s successes with The Devil’s Rejects is how he makes the audience, or at least myself, endorse corporal punishment by the end of the film. For somebody like me, who abhors the death penalty, this is quite the feat. By fermenting such disdain for these three characters – ok, maybe not Captain Spaulding, who, regardless of his cruelty, is an enjoyably funny character at times – Zombie makes their death so appealing.

While the film’s malevolent protagonists are despicable, their antagonists, the police and the bounty hunters (Danny Trejo and former professional wrestler Diamond Dallas Page), are equally appalling. Their vindictiveness is off-putting and their down-home bigotry, outright racism, and contempt for intellectualism is obnoxious, making them the opposite side of the same coin. It’s like Zombie’s stating these are the two forms of authority in this world, like god and the devil and we’re faced with either totalitarianism or totalitarianism under the guise of liberty. Embracing the Devil’s Rejects is a nod towards anarchy and embracing humanity’s most primal instincts and embracing those imbued with institutional authority is an acceptance of biblical justice, complete with that Old Testament vigor and vengeance. Sheriff John Quincy Wydell’s (William Forsythe) slaying of the Rejects’ mother figure (Leslie Easterbrook) is Zombie’s take on biblical temptation, where Wydell emulates Eve and takes the forbidden fruit – cold blooded murder. Zombie’s use of biblical allusions is nothing new, especially in the horror genre, but it’s not this that’s offensive about the film; it’s his depictions of callous individuals in the role of empathetic protagonists and antagonists. I have serious contempt for just about every character in this film. 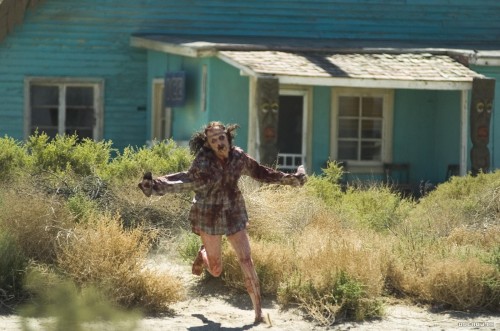 Regardless of the film’s offensiveness I thoroughly enjoyed watching The Devil’s Rejects. It’s obviously a depraved piece of cinema and I wouldn’t really suggest it to anybody who doesn’t enjoy sadism but I still enjoyed it. I do have other complaints about this film, especially Zombie’s lighthearted serial killer narrative, treating these acts and their actors like folk legends instead of unjustifiable. By inserting scenes where the Rejects party and receive undeserved pleasure annoys me. Of course it’s more fuel for the culminating fire, making their demise all the more enjoyable. Also, Zombie’s serial killer representation of The Last Supper, where the leads party and are then betrayed like Judas by Charlie (Ken Foree), is enjoyable and fits the film’s motifs. Zombie doesn’t maintain a strict adherence to biblical premises throughout, but there are many common ones and they fit the film. I wonder if Zombie went to Catholic school growing up.

Towards the end of the film, when Wydell tortures the Rejects there is a sense of justice because these three people are so depraved but it’s difficult to really enjoy it. Wydell’s actions reduce him to their level. Once again adapting a biblical reference, Zombie makes Wydell nail Otis’ (Bill Moseley) hands to a wooden chair – an act driving home the director’s irreverence and placing the film’s antagonist within a negative sphere. Its acts like this, combined with those of the Rejects that make none of the good guys or bad guys sympathetic. If I didn’t know any better I’d think Zombie film is a criticism of violence, even if it visually revels in it. It’s obvious the film is hyper-critical of religion, especially violent deeds done in religion’s name but these characters and their last stand indicate Zombie’s rejection of real-life violence.

A few weeks ago at Moviestop somebody said they didn’t like The Devil’s Rejects because of the use of Freebird for the film’s climax. Although I detest this song at this point and overall dislike Lynyrd Skynyrd, I felt its inclusion comical and poignant for Zombie’s representation of 1970s America – a time where freedom from the system still felt possible; where the open road was still open and not corporatized; where the values espoused in Easy Rider still rang true for many. With the Rejects death come the end of what many believed was real liberty. Shortly after the timeframe from the movie America entered the Reagan administration and 12 years of Republicanism, ending the wide eyed idealism of the ‘60s and ‘70s. I do believe the ‘70s was a great time for American cinema and Zombie’s homage to this period isn’t without merit, regardless of his sentimentalism for freedom wrapped in a shroud of viciousness. It’s almost like Zombie’s saying the autonomy these characters enjoyed, making possible their exploits, was the product of a time where the world wasn’t so closely connected; a time before globalization, cellular phones, myriad cops on the highways looking for drunk drivers, and only a handful of television channels. Growing up briefly in a time where these innovations didn’t exist I have a frame of reference and believe some of these innovations have limited freedoms but I also conclude their existence does make things more difficult for villains like the Rejects. 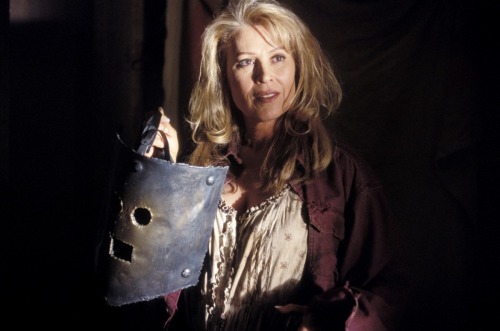 Zombie’s reverence for a simpler time (but not so simple and there really isn’t such a thing as the good old days) is interesting, especially since it’s championing an era responsible for many of the ills we now enjoy. While the ‘70s was a time of great music and film, awesome American muscle cars, and burgeoning concern over the environment, it’s also a time where people drove muscle cars getting only a handful of miles per gallon, a time of unparallel hedonism, absurd individualism, and some pretty rotten clothing. It’s also the era of the Iran Hostage Crisis, Richard Nixon’s stupidity, and some really bad music (after all, that decade gave us Lynyrd Skynyrd).

7 responses to “The Devil’s Rejects”