I was a small child when the original Tron first entered America’s cultural zeitgeist. Being a product of the Star Wars generation I naturally had (and still have) a soft spot for science fiction, especially visually alluring examples of the genre. As I get older the appearance has lost much of its importance but I’m still a sucker for cool looking science fiction films. 1982’s Tron is a prime example of this; a film with more visual than narrative appeal. I didn’t actually see Tron when it hit theaters but a few years later on television. I waited with baited breath, familiar with the story through magazines, read along records, and action figures. When I finally saw the film I wasn’t disappointed, mesmerized by Disney’s fabricated digital world, Jeff Bridges’ portrayal of the uber-cool Kevin Flynn, and the futuristic sounding analog synth soundtrack by Wendy Carlos (A Clockwork Orange, The Shining). Upon reflection I don’t see Tron the same way, instead believing it a stylish retro ‘80s film that’s more important to film’s history for its meticulous construction than content…and the arcade game and action figures are still pretty cool.

Supposedly the computer scenes in Tron were shot in black and white, with analog artists painting in the patterns on the costumes individually. Each film cell received scrupulous attention and it took a very long time. I find this fascinating, exhibiting the labors now abandoned in lieu of digital methods. The days of minor imperfections are over. Replacing them are computerized scenes – which are still labor intensive – but lacking the human factor, the connection between the artist and their work that comes from hands on contact. If there’s a legacy the new Tron film carries on I’m not certain what it is. The film doesn’t exhibit any of the effects featured in its 1982 predecessor even though characters and concepts from the original film permeate the new one. Bruce Boxleitner and Jeff Bridges reprise their roles from the first film but in a different fashion; Tron (at least Boxleitner’s version) barely appears in a film called Tron, regardless of the Darth Maul-esq character with the same name.

For all of Tron: Legacy’s stupidity I appreciate the film’s subtext, uncharacteristic for a big budget film released by a multi-national media conglomerate. The film champions open source software, arguing that free software and networks are the key to humanity’s future. Kevin Flynn (Bridges), before his disappearance in 1989, heralds for a paradigm change in the digital landscape, where people merge with computer technology and usher in a new stage of human evolution. Flynn’s company, ENCOM, changes strategy during his absence, mimicking a Microsoft or Apple philosophy – taking open source software and charging for it. Flynn’s son Sam (Garrett Hedlund), who feels abandoned by his father, still defends ENCOM’s original mission, sabotaging the company’s new operating system’s launch by leaking it online for free. Even though he’s the majority shareholder, Sam ends up in trouble, demonstrating a clash of ideals between the Flynn’s and ENCOM’s upper management – one believes in a digital utopia, the other believes computer technology’s ripe for economic domination.

A mysterious page (computer executive’s still use beepers?) reaches Allen (Boxleitner) and lands Sam in his father’s old video arcade. Amidst the classic machines and jukebox playing Journey and The Eurythmics Sam finds his father’s clandestine office and ends up in computer land. In the custody of an evil version of his father named Clu, Sam fights in the digital arena. This portion of the film reflects on the original Tron except the effects are contemporary. There are disc competitions and light cycle battles, controlled by Clu. With the help of Qurra (Olivia Wilde), a rogue program under Kevin Flynn’s tutelage, Sam escapes and reunites with his father, living in a remote lush penthouse off the grid. From here both Flynn’s try escaping the digital realm, running into a variety of obstacles along the way.

The plot isn’t that dense but it’s a children’s movie; a kid’s movie reliant on nostalgia for box office revenue. Disney’s hoping parents who grew up with Tron will bring their kids, reigniting the franchise for a new generation. I approached the film from a youthful perspective, suspending disbelief at the door, yearning for a theater experience reminiscent of my childhood. I wanted to like the film but it just wasn’t possible. Like Michael Bay’s awful Transformers movies I had a hard time determining what was going on – the effects are so complicated and discerning the CGI action was difficult. Of course I could differentiate between the heroes and villains (good guys=blue; bad guys=red/orange) but unlike the original Tron this film’s tailored for the ADD generation. The action’s so quick and the shots so short that figuring out who’s fighting who is sometimes difficult. That doesn’t negate many quality effects shots throughout Tron: Legacy, yet like most CGI films the digital effects are hyped beyond their limitations. In short, they’re selling the sizzle and giving sirloin instead of filet; I question whether the effects will date themselves quickly like the Lord of the Rings trilogy.

Let’s not disregard the absurdity of the original Tron movie: a film about humanoid beings, including one actual human, navigating around inside a computer. They have emotions, desires, and the limitations of the human form. Tron’s concept is flawed from the onset, yet it’s not supposed to adhere to realism. It’s a fantasy piece, giving a literal representation to technological transactions and exploiting our civilization’s fascination with computers. The original Tron’s metaphor is apparent at the film’s conclusion – the screen fades down and the hustle and bustle of a large metropolis is pictured in fast motion, mimicking the interior workings of a computer. In essence, Tron’s saying the computer is part of us, an extension of humanity. In The Question Concerning Technology Martin Heidegger states, “technology is a human activity,” asserting that technological inventions are made by humans for humans. The technologies humans create, whether it’s computers, language, or even a pencil, contain human qualities – they possess the essence of humanity.

Tron: Legacy, although a lesser movie than its prequel, contains this sentiment. Although the inner workings of a computer don’t resemble anything in Disney’s Tron franchise, their composition is very human. Clu’s actions in Tron: Legacy aren’t very different from those in the analog world: fascist control of a population, creating a large standing army with imperialist aims, jealousy. Saying my laptop or my Intel processor has jealousy issues is asinine, but using a computer fantasy film as an analogy for real world issues is a familiar trope for science fiction. Films like Robocop, Soylent Green, or They Live epitomize science fiction’s power as a tool of social criticism and even though Tron: Legacy is quite insipid at times it’s subtext is still potent. 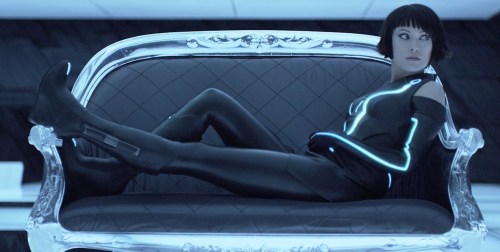 However, moving back to some of the film’s inadequacies (which there are many), I feel these are worthy of both critique and ridicule. The entire Sam Flynn persona – the wealthy, troubled bad boy – is silly. He rides a motorcycle, racing away from his abandonment issues, all the while being a complete bad-ass. The film portrays him as a dark, brooding tycoon’s son but he really just comes across as a rich loser who’s squandered all the opportunities thrown at him. Of course he learns a valuable lesson by the film’s end but his overall character is questionable. I really didn’t like Sam Flynn as the film’s protagonist and felt very little for him. It’s obvious his survival is guaranteed but I wouldn’t have felt anything if he died towards the film’s conclusion.

Next is Castor, a somewhat androgynous mix between Liberace and David Bowie in his Diamond Dogs era, played by Michael Sheen (Frost/Nixon). Sam and Quorra seek him out when attempting to leave the digital world and end up at his lounge, the End of Line Club and his loyalties are immediately questionable. However, it’s not his character that’s ridiculous but his demeanor and appearance. His derived feminine appearance, traits not necessarily bad in themselves, is completely out of place and completely absurd. Probably the funniest thing about his part is the blatantly hyper-sexual moments during his scene, where he metaphorically (and almost literally) ejaculates onto the audience. When Clu’s henchmen attack Sam and Quorra, Castor dances around his club with a cane which eventually he reveals is a gun and shoots, holding it incredibly close to his crotch – basically he’s blasting a load all over the place. What kind of message is this sending? I’m not a prude in any sense and felt this scene was hilarious. I am curious whether Tron: Legacy’s filmmakers realized the metaphorical pornography they were making, giving the audience a digital money shot. Although this whole scene wasn’t very lucid and seemed tacked on, the metaphorical eroticism Sheen delivers is hysterical and quite possibly worth the price of admission.

Finally I have to criticize Jeff Bridges, reprising his role as Kevin Flynn. His first portrayal of this character reflects the ‘80s well: an intelligent computer programmer who walks the line between yuppie and anti-establishment bohemian. He’s laid back, tacks “man” onto the end of most sentences, and seems like a giant pothead; in essence he’s a likeable character, even though he possesses a large ego and is brash. Fast forward almost 30 years (almost 20 of them lived in a computer world) and Flynn’s now a Zen master, reminding me of Pai Mei (Gordon Liu) from Kill Bill Volume Two. He walks around in a robe, has long grey hair and beard, and meditates, mixing martial arts guru with Bill Gates or Steve Jobs. That’s about it. The character really didn’t evolve and instead of creating a rich character the writers took tropes from the original film and adapted them to Bridges’ age and it felt cheap. For such a great actor, Bridges’ performance was an embarrassment. Thankfully he had the wherewithal to play Rooter Cogburn in the Coen Brothers’ fantastic remake of True Grit, released only a week or so later (and reviewed on this blog later this week). His subpar performance in Tron: Legacy is overshadowed by a great performance where he outshines John Wayne, basically erasing any kudos Wayne had for playing Cogburn previously.

Overall, Tron: Legacy was disappointing. Portions of the film were fun and noteworthy – Olivia Wilde’s beauty, some of the special effects, the extremely sexually suggestive Castor – but its storyline was heavily flawed – and this isn’t because it’s about humanoids inhabiting a digital space. Considering the film’s called Tron: Legacy I feel it suffers from the Caligula complex, where the son, believed to possess the traits of the father, can’t compare to his precursor. Caligula’s father Germanicus was an accomplished military general, beloved by the people; his son was a psychopath who tried to make his favorite horse a Roman consul and probably had sex with his sister. I’m not saying Tron: Legacy is comparable to incest or cold blooded murder, but there were times when I felt like films about either subject would’ve surpassed what I was watching. Even the 3-D effects (not the whole film is in 3-D and the film states this at the very beginning) weren’t fascinating, furthering the notion that 3-D is just another cheap gimmick Hollywood’s implementing because digital technology’s hurting ticket sales. For somebody looking for a tasteful homage to the 1982 classic they’ll walk away empty handed.