Reflections on A Christmas Story 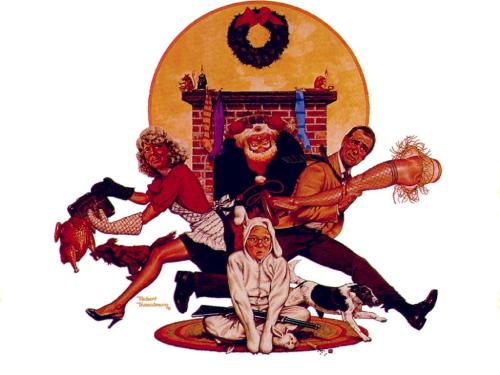 TBS is doing its 24 hours of A Christmas Story again and like usual I’ve already watched it once. Actually, saying I watched it is incorrect; it’s on and I’m doing other things. Usually I end up watching the film at least once every Christmas, although it’s not always sequential. Usually I’ll catch a piece here and a piece there, constructing the whole film over a 24 hour period. It’s definitely my favorite Christmas film; my generation’s It’s a Wonderful Life although a bit more subversive.

I noticed AMC’s showing Scrooged all day tomorrow and HBO Family Is showing Home Alone a few times tomorrow also. Last year one channel showed Home Alone for 24 hours and another broadcasted Christmas Vacation for a full day, competing with TBS; this year it’s down to AMC and TBS. I’m certain A Christmas Story will trump Scrooged, which is still a great film. However, this essay isn’t about the basic cable ratings war but instead about some observations regarding A Christmas Story.

Based on the Jean Shepherd story (who also narrates the film) In God We Trust, All Others Pay Cash, A Christmas Story is the quintessential Christmas movie of the last 30 years. It embodies all the materialism surrounding Christmas – demonstrating how this holiday tenet isn’t the product of the last few decades – but still embodies the togetherness that’s makes the holiday special. The film is funny, a little dirty, and reaches out to the kid in us all; the kid yearning for the perfect holiday gift. What’s striking about the film is the sociopolitical subtext in the film, which only permeates the surface when thinking about the historical context of A Christmas Story.

The film takes place in 1940, near the end of the Great Depression and less than a year prior to the Second World War. Ralphie’s family is one of the lucky ones, with the father maintaining steady employment amidst heavy economic turmoil – he’s “an Oldsmobile man.” It’s a time before the big box store, the Toys R Us/Wal-Mart megaregion that destroyed the town square. At the beginning of the film all the children line up outside the local department store, gawking at the collection of toys arranged in an appealing order. Ralphie sees his holy grail: “an Official Red Ryder Carbine-Action Two-Hundred-Shot Range Model Air Rifle,” and does everything in his limited power to get one. Of course Ralphie’s a lucky kid; a child whose family has a steady income, can put food on the table, and can afford Christmas presents while people are still in bread lines.

At the end of A Christmas Story Ralphie’s parents sit on the couch with the fireplace going and watch the snow fall. The children are asleep and the radio’s playing a beautiful Christmas medley, peaceful and serene. The two sit together and enjoy the dying embers of a fire and the last moments of an adventurous and wonderful Christmas. Unfortunately their next Christmas won’t be so happy. Less than 20 days before Christmas on December 7th, 1941 Japanese bombers will attack Pearl Harbor, instigating the Second World War. Many American men will end up dying in a bloody conflict lasting four years, ending with the dawn of the atomic age. A Red Ryder Carbine-Action Two-Hundred-Shot Range Model Air Rifle with a compass in the stock won’t mean as much compared to over two thousand dead people.

How many people that Ralphie knows will get drafted, dying in some ditch in Africa, Europe, or the Pacific Theater? Will the radio still play Little Orphan Annie or will war broadcasts replace Ralphie’s favorite show? What about food – will the coveted turkey (which Ralphie’s father’s addicted to) cost more or even be rationed? It’s like A Christmas Story is the last hurrah of a child’s innocence before world events change everything. Shepherd’s story is great because it shows the innocence of childhood before the sorrow of a world at war comes crashing down. The film represents a form of childhood unspoiled by video games and hyper-violent television images, a world where the simplicities of a smaller world triumph and childhood maintains innocence for longer than it does today. I applaud the world Shepherd and director Bob Clark fashioned, since it shows what Christmas can be for a child if the mainstream bastardization of the holiday is usurped. Maybe it’s impossible nowadays since media representations of this hyper-commercialized version of Christmas are everywhere, impossible to escape. 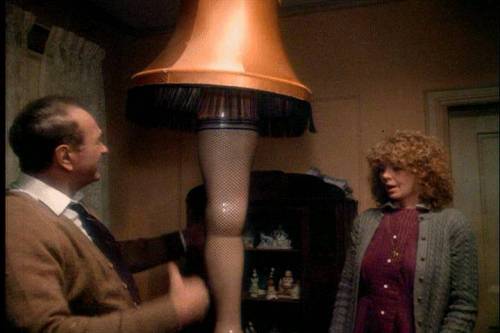 I’m not a Christian; I’ve never claimed to be and I could care less about Jesus, Mary, Joseph, the Three Wise Men, or the animals in the manger. I don’t believe Christmas is necessarily about that anymore. Instead it’s about whatever we want it to be; an amalgamation of concepts that people instill onto the day. It’s a Western tradition, where people put aside all the unpleasantness of the malls, the running around, the fighting over plastic toys made in third world countries and just relax, if only for a few moments. Unfortunately it’s not like this for everybody – there are millions going without, living on the streets or starving – but it creates a mindset where many put aside their pettiness and become selfless, if only for a short time. It’s when people who are normally self-absorbed will dole out food at a soup kitchen, drop that extra change in the annoying Salvation Army’s red bucket, or give gifts to the less fortunate. One can argue that these people are still in the majority, that materialism reigns supreme and selfishness still supersedes selflessness, but those who give up their pleasure for just a moment are embracing something outside our normal activities. If Christmas means only a handful of people will take a moment out of their day and give to those less fortunate then the shallow materialism we all endure endlessly for weeks on end is worth it.

So give up one viewing of A Christmas Story, drop a quarter in a red bucket or give a gift to the needy. Put aside the bah-humbuggery for just a moment and reminiscence on how lucky you are to be reading my meager words on your home computer (in your home!) and unwrapping gifts. Of course you should watch A Christmas Story at least once, enjoying one of the best Christmas films of the 20th century, but observe how lucky you are that you don’t live in a third world hellhole or live on the streets. Whether you’re religious, atheist, agnostic, or whatever – it doesn’t matter; the religious impact of Christmas is long gone and it’s one day each year where people enter into a similar mindset, using a sacred landmark for more than religious reasons.