I really like Lost in Translation; it’s a really good film. It’s visually stunning, has a great soundtrack featuring original compositions by Kevin Shields plus songs by The Jesus and Mary Chain, Air, My Bloody Valentine (Shields’ band), and others. Bill Murray is funny and tragic: a washed up actor wearing his depression like a scarlet letter. His midlife crisis, spawned by Charlotte (Scarlett Johansson), lights up the screen – a melancholy character at the film’s beginning comes to live, inspired by a girl over half his age. Their exploits around Tokyo seem fun, imparting the feeling of adventure and excitement a new relationship brings. Both characters jaunt into a fantasy world, only possible in an alien environment where camaraderie is a valued asset.

The film begins with a shot of Charlotte, lying in a hotel bed in her underwear. The camera pans from the back of her head to her butt, partially revealed by her transparent panties, accompanied by the opening riff to Shields’ original composition City Girl. The screen fades to black, starting the next scene featuring Bob (Murray) waking up in a taxi. The alluring lights of Ginza, a region of Tokyo, reflect off the cab’s window, displaying Murray’s perspective. The introduction to Girls by Death in Vegas plays; a somber, sleepy song illustrating Bob’s lethargy after a long flight and an even longer – and disappointing – film career.

The remainder of Bob’s introduction to Tokyo displays a similar theme: insomnia, unfamiliarity with foreign amenities (he’s too tall for the shower and bed), and loneliness. Bob and Charlotte are fish out of water, living in a foreign place and alone. Charlotte’s husband’s, a music industry photographer, is working most of the time; Bob’s family is back in America. His only contact with his wife involves home improvements and brief parenting – his wife’s already spending the $2 million he’s receiving for a Japanese whiskey commercial. The attraction between the two protagonists isn’t necessarily sexual but emotional; Bob and Charlotte are lonesome and find solace in each other. That doesn’t negate the sexual tension between the two protagonists, but it isn’t the primary impetus of their relationship. Bob finds a zest for life in Charlotte and she finds the same, although each approaches the relationship from a different perspective. The difference in age dictates their desires.

Aside from the depressing aspects of Lost in Translation, the movie is really funny. Bob’s interactions with his surroundings are hilarious: the shower and bed being too small, being the tallest person in an elevator, negative interactions with a Japanese call girl (“lip my stocking, prease”). An early scene where Bob meets the Suntory whiskey personnel and they exchange business cards and gifts is very different from American business and reflects the intention of the film’s title. Bob’s interaction with the Suntory commercial director also reflects the film’s title: the director’s emotion seems abrasive and his long diatribe’s only reveal a few words. It’s definitely not Bob’s element and even though he gives a decent performance, he feels estranged.  A scene where Bob and Charlotte do karaoke with some Japanese friends is funny (Bob’s rendition of Roxy Music’s More Than This is tragically comic). When Bob sees himself on television, dubbed in Japanese, his desperate situation hits home. Even in a ritzy hotel that mimics America he’s still out of place. 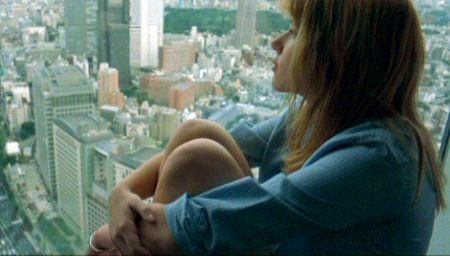 The first portion of the film demonstrates this displacement both main characters feel. Charlotte’s experiences around Tokyo are the same: seeing young men reading pornographic manga on the subway makes her uncomfortable, visiting a shrine makes her feel empty. When talking to a relative on the phone she says, “I don’t even know who I married.” Charlotte’s husband John (Giovanni Ribisi) has changed and she feels left behind; alone in her relationship. She has no stability staying in a foreign hotel, demonstrated by her decorating the hotel room, and her husband’s career is taking him further away. Their conversations are filled with unimportant banter and have nothing in common. Director Sophia Coppola’s words and visuals demonstrate a loveless marriage (ironic that the My Bloody Valentine song used is from the album Loveless). John’s unexpected reunion with action star Kelly (Anna Faris) cements this distance; her husband hobnobs with movie stars and even flirts with her in front of Charlotte. Another example of Charlotte and John’s distance is in a group of old photographs. Each picture features John looking at the camera when Charlotte’s looking at him. He’s narcissistic. This commonality between Charlotte and Bob binds them together; both are looking for something more out of life.

Coppola captures Tokyo brilliantly, demonstrating all the complexity of life in a city like this. She approaches the film’s visuals from an avant-garde perspective, taking a cue from such directors as Wong Kar-Wai and Francois Truffant. Many shots in Lost in Translation remind me of Kar-Wai’s Happy Together or Fallen Angels, relying on quick cuts and natural lighting (displayed in many exterior city shots). Her film flows more like a music video at times than a traditional film. This works for Lost in Translation, since the film contains both the shiftlessness of post-modernity and two people going through a personality crisis: Bob’s is mid-life and Charlotte’s trying to find herself after college.

I feel the situations Coppola gives are believable, even though the characters are upper-class Americans and their struggles reflect their privilege. A scene where Charlotte sits on the windowsill staring out at Tokyo captures this perfectly: she’s bored, alone, and depressed. She graduated from Yale with a degree in Philosophy and doesn’t know what to do; her husband is a high-profile photographer; Bob’s an actor whose career is slowing down, forcing him to work in Japanese commercials. Their nights on the town involve all very nice places – especially the nightclub they visit. Coppola shoots this scene beautifully, capturing the dance floor’s lights in a mesmerizing fashion. This scene, and the accompanying escape after an altercation, brings Fallen Angels to mind specifically: the natural light, the moving camera, the rebelliousness – These are just like Wong Kar-Wai’s characters. However, unlike Kar-Wai’s protagonists, these characters aren’t placed against an anxiety ridden Hong Kong only a few years before the 1997 handover. Instead these characters fully embody American uncertainty and fears. The film came out in 2003, amidst the fallout from 9/11 and the beginning of the second Iraq War and a growing disparity between socioeconomic classes.

The film’s conclusion, where Bob confronts Charlotte on a busy street and whispers something in her ear, is wonderful. The audience can’t hear what he says and we’re not supposed to. I’ve heard criticism of this scene, but I believe its better this way. Their relationship only exists in Tokyo and can’t function anywhere else – it’s a fantasy. Both characters have real lives outside of this diversion. I feel they both love each other but it’s because what they gave each other at a specific time in their lives. Charlotte gives Bob attention and youth; she gives him confidence and attention. Both give each other feelings they sorely need. It’s not their age difference that makes their relationship impossible but the world’s they created prior to meeting. I would like to see them together, but their interactions display only the honeymoon phase of a relationship and don’t reveal what they’d be like together after this passes. Like Mad Men’s Don Draper, who “only likes things in the beginning,” it’s probably best they experienced the beginning feelings only in Japan; it’s a reprieve from reality and necessary for their return to reality. 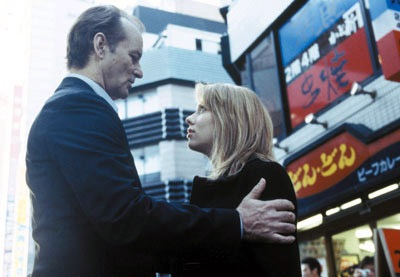 The film received two Oscar nominations; it won one (Sophia Coppola for best original screenplay). Bill Murray lost for Best Actor, which is a shame since his performance is superb. He really reinvents himself in this film, demonstrating both his dramatic and comedic chops. His comedy is aging but works for him. Instead of the goofball from Caddyshack or Ghostbusters, Murray’s humor comes from an honest place, reflected in his aging. Instead of a zany Peter Venkman, we see a middle-aged man, facing down the remainder of his life. Charlotte asks Bob if things get easier; he says “no.” Murray exhibits this outlook throughout the film – his sarcastic look of defeat (which he also brings to Wes Anderson’s Rushmore) resonates throughout the film. Even when he’s with Charlotte he exudes this sentiment, although it fades to the background in many scenes.

Costing only $4 million to produce, Lost in Translation was a box office success, raking in eleven times that domestically and even more internationally. It’s what led to a $40 million budget for Marie Antoinette, which was a box office failure and allows Coppola to continue making her precious indie films. I hope her next movie Somewhere compares to Lost in Translation, since I feel it’s her best movie to date.

2 responses to “Lost in Translation”