I really like Frank Darabont’s adaptation of Robert Kirkman’s The Walking Dead. I wasn’t sure if I would at first, but three episodes in I’m quite satisfied. It has a cinematic feel, the acting is pretty good, and the casting isn’t all that bad (except Andrea, who looks about 35 instead of around 25 like in the comics). Last night’s episode, “Tell it to the Frogs,” was by far the least action packed episode yet, but it was still good. As I sat at my laptop with the replay running in the background I had a few complaints that I brought up in my first post, primarily involving Rick’s reunion with his family. I felt the scene was over the top, melodramatic, and the score was cheap and contrived – bringing to mind the sounds of a Hallmark commercial. The only thing missing was a singing card congratulating Rick and company on surviving the zombie apocalypse. This overtly saccharine moment, albeit necessary, is clichéd – lowering the standards set in the first two episodes and appealing to the lowest common denominator. Rick’s emotional outburst and Morgan’s tearful reluctance in the pilot episode were about as sappy, yet the score (reminding me of Apollo era Brian Eno) bridged together Morgan and Rick’s scene; it was the glue holding together a histrionic moment and plucking it out of the mundane. The reunion from last night’s episode missed the mark due to inept scoring, which can sometimes make or break a scene. In this instance it didn’t work. 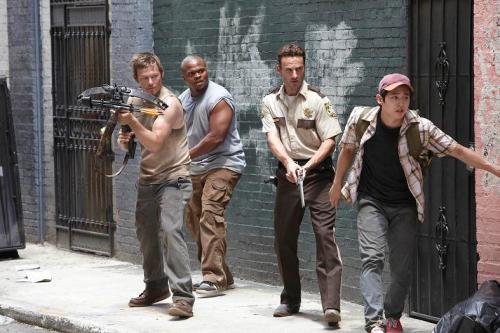 Today a co-worker, who also follows both the show and the comic series, brought up last night’s episode, critiquing the final scene where Rick and company find Merle missing and an empty pair of handcuffs and a hand left behind. His appraisal involves the absurdity of Merle’s actions and his observations aren’t without merit. Since the door was chained the zombies didn’t enter and removing his hand wasn’t necessary. I argued it was for dramatic effect – a stance I believe completely accurate – and he agreed. However, if Darabont’s trying to capture realism with his new series, wouldn’t Merle have cut the handcuffs instead? I know people do stupid things when placed in intense situations, but it’s not like Merle didn’t have time on his hands. Obviously the zombies weren’t a real threat, otherwise cutting the lock wouldn’t have been necessary. Merle’s represented as a dumb redneck, but I fail to believe he’s completely stupid; he isn’t book smart but he’s probably street smart and his continued survival during the zombie epidemic confirms this. I understand paying homage to Mad Max is at play here (along with foreshadowing, since a major character loses a hand later on in the comics), but Merle’s actions reduce the show’s quality. It allows in simple exploitation in lieu of consistency.

This is such a minor plot point and I’m certain readers will dismiss my judgments, yet I’m not certain whether such dismissals are warranted. Remember, television is probably the lowest intellectual medium in our culture, hosting everything from highbrow art shows to Battle of the Bods – a reality show where complete tools evaluate women’s physical attributes for money. Television is also a cheap medium, accessible to most people for either free or cheap, and the advent of the internet allows a wider audience admission into the cultural wasteland it is. Without sounding pretentious, everybody from acclaimed thinkers to sub moronic wasteoids can access this passive medium. With that in mind, I’m certain this necessitates a filtering down of the product, sometimes reducing it to bland symbolism and hooks, essential to bringing in a diverse audience. This doesn’t negate The Walking Dead’s quality, but it doesn’t explain any pandering the show contains. 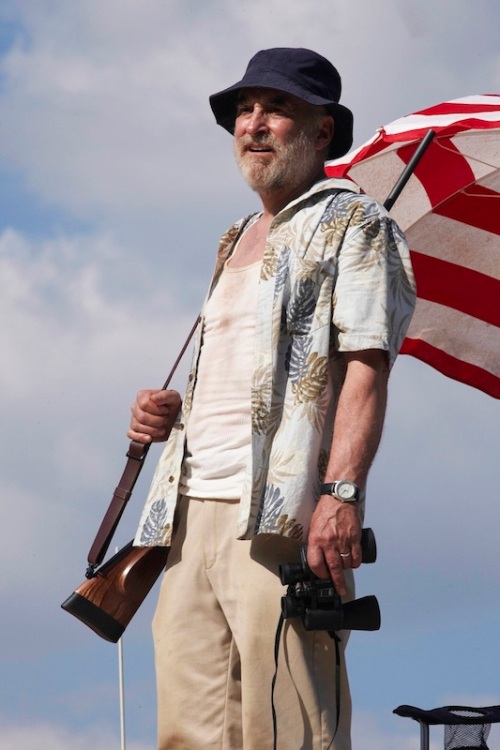 Other than these two observations, I really enjoyed this week’s episode. It put the action and physical violence on the back burner in favor of character development – a necessity when making a character driven series. I’m looking forward to next week’s episode – penned by The Walking Dead creator Robert Kirkman – which looks promising from the asinine previews following the show. Personally I hate these previews (for any television series) since they don’t actually say anything about the upcoming episode but just give a bunch of scenes out of context. Yet knowing the general storyline from the comic books I’m certain it’ll spell the end for their makeshift camp, setting up for a new batch of characters.

4 responses to “Further ruminations on The Walking Dead episode three”