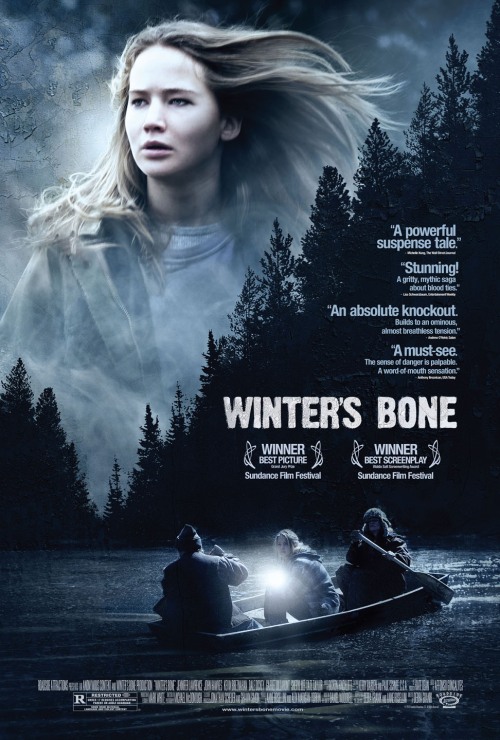 Winter’s Bone, a low-budget critical darling follows Ree Dolly (Jennifer Lawrence); a 17 year old girl stuck taking care of her two younger siblings and her mentally crippled mother. Her father Jessup, a meth cooker/pot dealer, has gone missing after putting the house up for his bond. Ree has a week to find him or a bail bondsman will take the property. Resembling Dorothy Allison’s semi-autobiographical novel Bastard Out of Carolina, Winter’s Bone explores poor, rural people living in the Ozarks – their way of life, the dreariness of their surrounds, the desperation, the patriarchal family structure, and most importantly, the drug culture. Allison’s novel takes place a few decades ago and most the men are alcoholics; Winter’s Bone is contemporary, demonstrating the effects of crystal meth on rural America. Meth is a central theme in the movie, a tie that binds people together and influences the men’s behavior. That doesn’t mean the story focuses on the men in Ree’s life, but the women’s struggles are based on male actions. The film portrays a very sad life, where motivations and rationales unfamiliar to city dwellers come to the forefront and ask outsiders to confront a different way of life.

Ree’s family is destitute. Receiving a little help from their neighbors and others, Ree’s the matriarch of the family, taking care of her younger sister Connie, younger brother Sonny, and her mother. Ree’s home is under threat of usurpation in about ten days unless her father shows up for court, prompting her search for him. Everywhere she goes Ree meets obstacles; her uncle Teardrop (John Hawkes) warns her off, distant cousins in a blood feud with her father aggressively do the same, eventually leading to violence. Everywhere Ree turns she’s met with obstructions; she’s stuck in a situation with no resolution and carrying the sins of her parents. 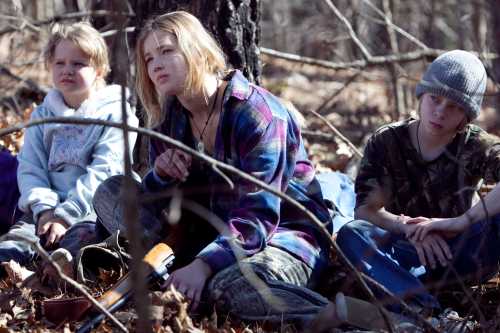 Although my take on the film may be judgmental, I found the behavior of many in Winter’s Bone savage. I know their lives are filled with desolation and are difficult, but the codes these people live by are brutal. Instead of helping a minor find her father, beating her and knocking out a tooth is acceptable. Even the characters in Bastard Out of Carolina wouldn’t agree with the actions of these characters – then again, Dorothy Allison’s characters didn’t do crystal meth. I feel Winter’s Bone primarily explores the impact of crystal meth on this section of the American population and male domination over women. There are many scenes where the women seem downright frightened of the men in their lives – a scene where Ree visits Teardrop, featuring Teardrop handling a pistol and asserting his physical dominance over both Ree and his wife, displays the outlook towards women in this region. Men rule supreme, their actions aren’t open to investigation, and any deviation from these rules leads to physical retaliation. When Ree visits the relatives with a blood feud against Jessup the matriarch asks her, “Don’t you have a man to handle these things?” This kind of attitude explains how things are done here: women do what the men say and don’t question things, since it’ll lead to violence. 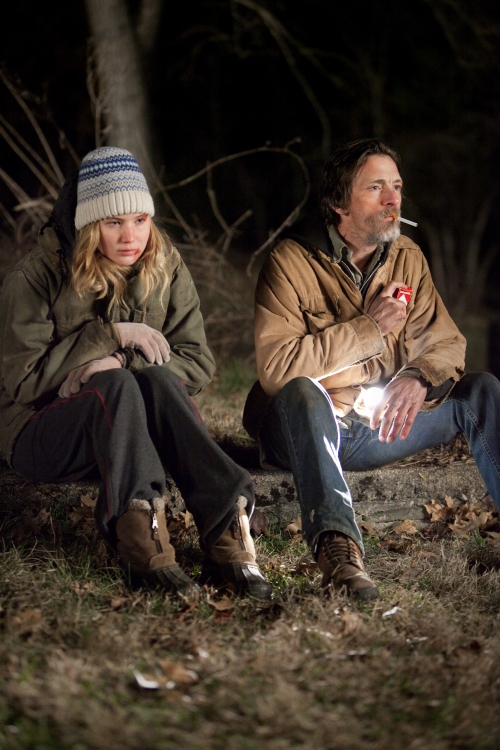 The most interesting character is Teardrop; a meth addicted somewhat silent man who seems insane at times. Although Teardrop cares for Ree, his demeanor and actions are scary. Eventually he comes across as the most decent man in the film, regardless of his frightening temper. A confrontation between Teardrop and a small gang of local men – leading to Teardrop bashing in one of their windshields with an axe – indicates his instability. All during this scene, starting at a bar and ending in a parking lot, Teardrop doesn’t exhibit any outright fierce tendencies but his actions exude anger, regardless of his demeanor. It’s uncertain whether his actions are fueled by crystal meth or the ways of their environment, but what’s certain is he lives in the moment, unable to see the consequences of his actions. Ultimately, Teardrop is the most likeable male in the film, coming to the aid of Ree and her family where he can, but it doesn’t negate his unhinged personality.

While watching the film I kept wondering if anybody who lives like the characters in Winter’s Bone will ever see the film, wondering what they’d think of this portrayal of their lives. Would they be upset? Would they see it as accurate but find offense with it? Since I’ve never lived in such squalor (and I don’t mean this as an insult but a matter of fact) I can’t relate to the conditions depicted in the film. The film makes somebody looking into an unfamiliar way of life judge according to their own conditions; an action I did but can’t condone. While my life, and other like me, is filled with various distractions and pleasantries, the lives of these characters are much simpler. They don’t think ahead or think about what their actions lead to, instead living in the moment since that’s all one can do. Television, internet, and other such luxuries are absent, leaving only a life filled with interactions with those in their community and their surroundings. This probably explains the blood feuds, the fights, the appeal of drugs like crystal meth; all activities people engage in when there’s nothing else to do. Remember, people like Alexander Hamilton, author of The Federalist Papers, was into dueling – an indicator of what people with limited distractions will do to pass the time. 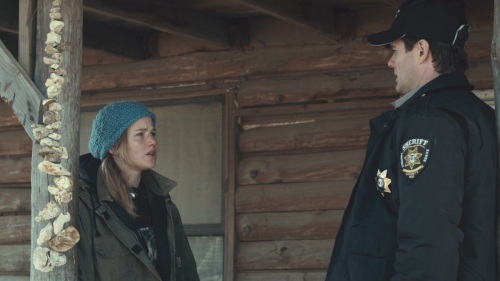 I still find it difficult accepting the actions of the characters – I feel their exploits somewhat savage and barbaric. I’m not trying to legitimatize actions like cooking crystal meth, blood feuds, beating the living hell out of people for unclear reasons, or anything else in Winter’s Bone, but approaching this way of life from ours is condescending. On one hand saying they’re a bunch of stupid redneck hillbillies isn’t completely wrong but continually associating them with these terms allows the continuation of this way of life. If we relegate rural people to a certain set of characteristics, which eventually leads to a lack of education and lack of attention or assistance, we’re perpetuating the factors responsible for creating the mindset they embody. Concepts like blood feuds have existed for centuries and although they’re not like they were almost two centuries ago (see The Adventures of Huckleberry Finn for a good example of family feuds), they still exist. Considering the change they’ve gone through since the mid 19th century, the progress made is positive. Whole families aren’t murdered anymore because of some forgotten squabble, yet there’s still bloodshed. Sometimes progress is slow and an absence of economic or educational factors in a region only allows the continuation of such practices. Maybe the film’s asking why opportunities aren’t evenly distributed throughout our society, since maybe the answer to such squalor is equal opportunities instead of stamping these people white trash.

Then again, maybe it’s what these characters want. Sure they’re sad, but they stay. It’s not easy to leave someplace, especially when money is low and other factors come into play, but many of these characters don’t attempt anything else. Like the moonshine bootleggers of the 19th and early 20th centuries, this population has now turned to crystal meth to earn a quick buck. What it’s done to the population is abysmal; it’s created even more depression regardless of the quick economic gains. Ultimately the monetary yields are far surpassed by the effects the drug has on the users and the community: burned down houses, destroyed families, unstable citizens. The effects of crystal meth far surpass anything moonshine did and have created what Winter’s Bone visually describes as third world conditions – and it’s in our own backyard. I’m not one to condemn drug use, since I believe marijuana should not be illegal and its prohibition is a travesty, but meth is definitely a drug that has no positive consequences. If you get anything out of Winter’s Bone it should be how bad crystal meth is for people. I could go on and on about how federal intervention into Sudafed (the primary ingredient in crystal meth) has created a more dangerous drug with each level of restriction, but ultimately the drug is no good from the beginning. However, these restrictions have created a drug that gets worse with each new regulation, indicating how the drug’s dangerous side effects are symbiotic: each new regulation creates a worse version which in turn creates new regulations and so on.

In addition to this commentary about rural America is the story of a young woman looking for her father, a story that ends in sadness. The scene where Ree finds her dead father is particularly gruesome. Even though very little violence is shown, the sounds, the reactions of the characters, and the situation itself, are horrid. I felt gross watching this scene and the end result – Ree sitting in a police station with a plastic bag saying “thank you” on her lap containing her dead father’s arms – leaves a bittersweet feeling for the viewer. The resolution goes well for Ree and her family, but nothing is truly resolved. Teardrop is distraught (although showing his feelings with the solemn quietness he displays throughout the film) and Ree’s mother and siblings are still incredibly poor. However, there’s the potential for a new life with the film’s end. Throughout the film Ree is the only character with any truly positive characteristics and by the conclusion it seems like all her struggles were for something. While it’s uncertain whether she’ll escape from her bleak environment, at least she has a fighting chance.