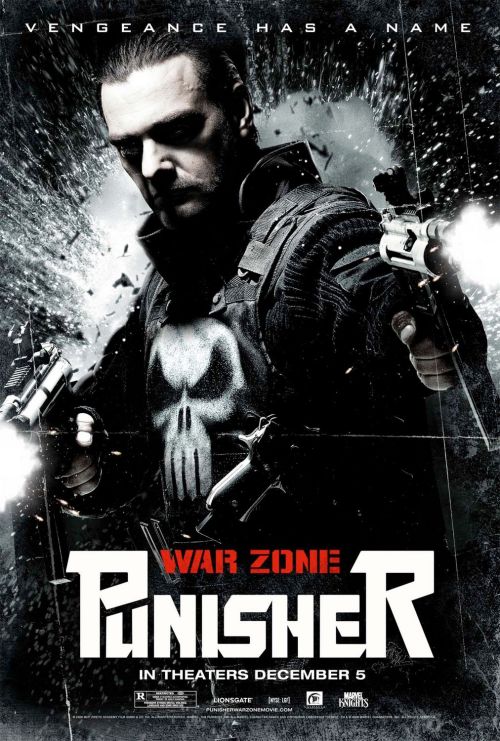 On HBO’s Rome Ray Stevenson is a bona fide shit kicker. In Punisher: War Zone the only difference in regards to his ass kicking ability is his choice of weapons. I’m not saying Punisher: War Zone is a great film – it’s a slasher film in disguise – but for a cheap laugh and a tongue-in-cheek action romp, it covers its bases. The film is made for both fans and those in the know; it avoids a lengthy back story and the film commences right in the thick of things. Within less than five minutes the Punisher is mowing down gangsters at a rapid pace. It continues on this path, with the film becoming more violent and more ludicrous as time passes. Eventually you’re left with the feeling you’re part of a great joke; a joke paying homage to both movies like Charles Bronson’s Death Wish series and the Friday the 13th films.

I mean this when I compare the Punisher to Jason Voorhees. Both are ruthless killers, operating within a set of very limited parameters – mostly they don’t slaughter children. While the Punisher has a conscience, especially when it comes to “the innocent,” he murders like Voorhees, killing everything in sight with the touch of a maniac on speed. The Punisher is pretty much indestructible and so is Jason; they both lurk in the shadows; are both mysterious and mythic; they’re both pretty quiet (although the Punisher can actually speak and Jason doesn’t). I’m not saying the Punisher is a soulless murdering machine, but he’s not far off. His version of justice is the same as Jason’s: warped. Both believe they’re doing the right thing – Jason’s taking revenge for the death of his mother (see my earlier exploration of Jason here.) and his death because of irresponsible, sex crazed teenagers. The Punisher is killing “bad guys,” because his wife and son were killed by gangsters. There’s no grey in their visions and everything is black or white, subject to their whims exclusively.

Unlike the Punisher film with Thomas Jane, which was supposedly a serious film, Punisher: War Zone is a comedy, relying on its viewership to come from gore hounds and bad action fans. A prime example of this is the gang of freestyle walkers (or parkour for the initiated) delivering drugs and money throughout New York City for the main villain, Jigsaw. I was wondering why such a silly group of characters are in the film, until the Punisher shoots one with a rocket. A goon is jumping from one building top to the next when the Punisher’s rocket comes from off-screen, blowing him into tiny pieces. The only logical reason for their existence in the film is this one scene, which is probably the best gag in the movie. However, like Michael Winner’s Death Wish III, I feel Punisher: War Zone is out of touch with America’s youth, displaying a disingenuous depiction of youth culture. I understand people freestyle walk, but the clothes and demeanor of these characters are out of touch with young Americans. They’re a figment, like characters on professional wrestling – they mimic portions of popular culture but through the eyes of older men who can’t remember what it’s like to be a teenager.

Yet in regards to the gore quotient in the film the creators know what the audience wants. It’s filled with excessive bloodshed, exploding heads, and so much more. It’s not Total Recall or Cannibal Holocaust, but it definitely enjoys heavily exaggerated depictions of death. The film’s final gory shootout between Jigsaw’s assembly of various hoods and the Punisher employs tactics from Peter Jackson’s Dead Alive (Brain Dead in New Zealand) and a variety of other dynamic action climaxes (think John Woo’s The Killer or A Better Tomorrow II for a solid example). Although Punisher: War Zone does incorporate all the elements of previous action movies into its repertoire, its derivation doesn’t come close to its predecessors. Yes, I highly enjoy the action scenes in this latest Punisher installment, but it’s not anything new. I’m not certain it’s trying to be though; I’m of the belief it’s trying to create a fun 90 minutes or so that resembles a really enjoyable Punisher graphic novel come to life. For that I have to applaud – it’s not acting like anything more than what it is. 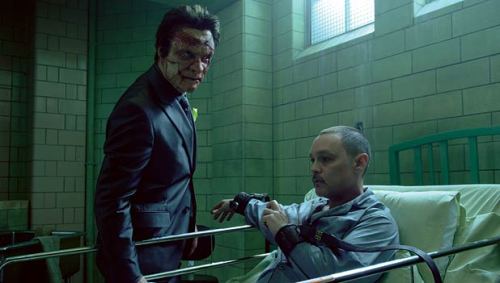 My favorite era in the Punisher saga is the early issues of Punisher War Journal, especially when the early issues were drawn by Jim Lee and a variety of other highly competent late ‘80s/early ‘90s artists (see Punisher War Zone issue #11 for a good example). They were simple, violent, and fun. What you found in those 32 pages wasn’t trying to be anything more than a simple tale of misdirected vengeance – what I now find great bathroom reading. Instead of aspiring to the level of Marvel’s Secret Wars or the Age of Apocalypse X-Men storyline, these earlier Punisher comics were self contained. Aside from a few instances where you needed to read two or three issues for a complete story, it was easy to come in and out of The Punisher. Punisher: War Zone gives this feeling: it’s for fans of either The Punisher or gory action films but watching a long line of films for clarity isn’t necessary.

On the topic of Ray Stevenson as The Punisher, I believe he’s perfect for the role. It’s possible my bias is shining through since I’m a big fan of HBO’s prematurely cancelled Rome, but unlike Jane (who now is coincidentally is on HBO’s mediocre series Hung), Stevenson’s performance is believable. His silent brooding and no nonsense demeanor depict Frank Castle perfectly. His ability as an intense bad-ass shines through and his delivery of the corny, yet darkly comedic dialogue is spot on. My only hope is a sequel comes out where Stevenson reprises his role, because I could definitely sit through another one or two Punisher films. However, since the film cost $35 million to produce and only grossed around $10 million worldwide, I’m not very confident there’ll be another Punisher film for a long while. Most likely it’ll be a couple years until Marvel (now owned by Disney) decides a re-launch is justifiable or profitable.

A final issue I’d like to discuss is how The Punisher could only exist in the West. Even though the Middle East is rife with rebellion and insurgency, its aims are mostly political. The Punisher, on the other hand, is not overtly political in his vigilantism. Of course his acts have political connotations – acting as a critique of the American justice system, the occasional fallacies in American law, the usurpation of Constitutional protection for the truly guilty, and so forth – but his primary motivations are personal. Like Charles Bronson in the Death Wish films, The Punisher believes American justice is erroneous, facilitating the need for his intervention; it’s a violent critique from a certain point of view. Some perform their critiques with a pen or vocally. The Punisher does it with bullets, rockets, grenades, and the arsenal of a small El Salvadorian army.

For the sake of a comic book or feature film, I enjoy this. In real life I think it’s a step backwards. Not all laws are justifiable or demand obedience, but fighting fire with fire seems like a reversal of progress. As stated before, the American justice system isn’t always right – if that was the case O.J. Simpson would’ve been found guilty for murder and many of George W. Bush’s inner circle would be in jail for treason (outing a C.I.A. agent) – but is probably one of the best around. Nothing’s perfect, but the answer isn’t assembling a modest arsenal and attacking criminals without prejudice. My hope is that people see Punisher: War Zone for what it is: extremely violent fantasy. It would be dangerous if otherwise.

Also, the film features Wayne Knight (Newman from Seinfeld) as The Punisher’s sidekick Microchip. It’s nice to see Knight working in a prominent role, because he’s my favorite secondary character from Seinfeld and his role and performance in Punisher: War Zone is excellent. His character and performance lends an extra bit of humanity to a character who seems devoid of emotion or any human sentiments.