I saw a review online regarding Man Bites Dog as a postmodern look at serial killers. I think the writer is correct in that the origins of the film’s protagonist, Ben, just is – the origins of his homicidal urges don’t receive a full explanation even though his parents discuss his childhood briefly. The film has a clear ending, which is common in modernism, but the ambiguousness of the world Ben and the filmmakers of this pseudo-documentary are definitely postmodern. Ben’s environment is part realistic and part fantasy; a world where people like Ben are part mobster and part homicidal maniac, where factions between people engaging in the same occupation as Ben shoot it out John Woo style. The openness Ben has regarding his job (murderer, thief) is complete fantasy, especially when comparing Man Bites Dog to other serial killer stories like Henry: Portrait of a Serial Killer or Showtime’s Dexter. In these other pieces the killer tries to keep their murders secret; Ben doesn’t. He shares the secret of his trade with the filmmakers, obviously aware that eventually people will potentially see the film and know what he does. Any concern with the legal ramifications of Ben’s actions is non-existent in the film. Because of this I can’t claim Man Bites Dog a realistic glimpse into the actions of a serial killer but instead a film looking at the serial killer intimately – a film more concerned with the great social implications of violence and how it affects people living in a society where desensitization to violence is commonplace.

Shot on a remarkably low budget, Man Bite Dog (called It Happened in Your Neighborhood in France) uses its budgeting lack in its favor. The filmmakers and stars (Remy Belvaux, Andre Bonzel, Benoit Poelvoorde) rely on a thorough investigation of Ben’s character for a good portion of the film. The rest features Ben killing people in very inhumane ways. What’s interesting about Man Bites Dog is how the juxtaposition of what’s disturbing is flipped – instead of the violence being the most horrifying aspect of the film, it’s instead Ben himself that’s terrifying. He’s crude, sexist, racist, and verbally violent, in addition to being bizarrely charismatic. Ben has no qualms about discussing his trade or his actions; in fact, he actually gets pleasure from discussing his profession. A scene where Ben is at a ravine dropping off bodies and explaining how to properly dispose of them (a certain amount of rocks is necessary for the elderly because their bones are porous), the zeal he exhibits when educating the filmmakers is frightening. Unlike some serial killers, who are driven by some innate urge they abhor, Ben takes great pleasure in his killings. He sees it as a normal part of his existence, something, in his eyes, that’s acceptable.

Thinking further about Ben and the wider implications his actions have, Man Bites Dog is taking a stab at the current culture (or at least current in the early ‘90s). The lack of sensitivity the world has towards violence is obviously a subtext of the film. When Ben kills a suburban family, suffocating a child with a pillow, the film is criticizing the way people view world events. The death of a child, although quite upsetting, takes precedence over events such as the American sponsored genocide in East Timor by Indonesia. A child down a well takes priority over thousands massacred for fiscal gain and a scene when Ben finds an article about his suburban massacre in the newspaper articulates this. Countless murders avoid reporting, mostly because the victims are black, elderly, or poor; but when a middle-class family is struck down in their home, it makes the paper. The three filmmakers are (although I can’t confirm this since I haven’t spoken to them in person) commenting on the selection of what makes the news. Noam Chomsky states this is one of the filters of the media in Manufacturing Consent, where he articulates how the media will demonstrate their bias by what they pick for print. If a piece supports a particular agenda – that of either private enterprise or the state – it’s fit for print. However, if the piece has no relevance to the necessities of power, it falls into the cracks, unseen by the masses and therefore off their radar. When the suburban family dies, they make the papers since the protection of this economic class furthers both the wishes of the state and businesses. 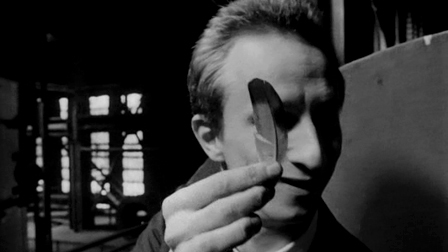 Man Bites Dog also explores the West’s lack of disgust when it comes to violence. We live in a society where violence is acceptable but sexuality is condemned. The MPAA gave Man Bites Dog a NC-17 rating – a rating mostly reserved for sexually gratuitous films. The violence is Man Bites Dog is indeed excessive, but it’s the treatment of the violence issue in addition to the few moments of nudity (a horrific rape scene and one when Ben kills a black man and investigates his penis to confirm the length myth) that were responsible for the rating. Its approach to violence is truly dismal, but its Ben’s reactions to the violence that are truly disturbing. The film is regarded as a black comedy and there are moments when the film is grimly comedic, but the funny moments are countered by a great deal of horrific instants.

The end of the film, which results in the deaths of everybody involved (or rather those who are still alive since many of the crew die during the film’s making), feels justifiable. Like the end of Rob Zombie’s The Devil’s Rejects, where I felt satisfied since the film’s protagonists were truly vile individuals that deserved to die, I was truly satisfied. Ben and his documentary crew died answering for the consequences of their actions. The film’s ending argues that every action has consequences and Ben’s death, along with the deaths of those close to him (his best friend Malou, his parents, etc.) is the result of his murderous journey. This is the only time in the film when Ben exhibits any emotions – for the majority of Man Bites Dog Ben comes across as a true to form sociopath, unable to display any empathy or emotion. In fact, Ben’s emotional display in the film’s third act is further evidence that he’s a stereotypical sociopath: his only demonstration of emotion is in direct relation to himself. His concern isn’t for those who died and their suffering, but what it means to his own existence. Those close to him aren’t there because of any reciprocal relationship, but because he uses them for one reason or another. For example, Ben articulates that Malou teaches him about fine art and a scene where the two are playing music together demonstrates how Ben looks at her as something like a pet. When she makes a tempo mistake Ben corrects her the same way one would correct a dog or cat caught doing something wrong. He doesn’t exhibit any anger, but treats it like a case of instilling his position of dominance. 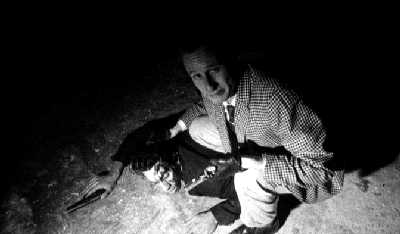 Winning best feature at the 1992 Cannes film festival, Man Bites Dog has been heralded as a cult classic, on par with A Clockwork Orange in terms of its hyper-violence. There are other issues I neglected to discuss in this post, such as the films voyeuristic issues, but I’m sure I’ll do another post down the road about this film. It’s one of those movies that sticks with you, not necessarily because of it’s extreme violence but because the action of Ben and the filmmakers are commonplace in our society. How frequently do news reporters embed themselves with a violent group in the name of quality reporting, often witnessing violence and standing aside for the sake of journalistic integrity? What’s the difference between Ben’s crew and somebody inside a platoon in Iraq, where insurgents are killed daily? Aside from the Ben’s crew lack of credentials and the power of a multi-national media outlet, there isn’t much. One could argue that America’s primary goal in places like Iraq or Afghanistan is profit, both by gaining resources and money through the continued sales of guns, construction for infrastructure, and so forth. Ben robs the people he kills, the same as a government robs the resources of a country through it’s military. In essence, Ben and the filmmakers are a perfect metaphor for the ultimate goals of power – both state and private. However, the actions of Ben are abhorred because they are outside the system whereas those of large institutions are justifiable because of their size and control over the means of discourse. This is the only difference.

Here is the trailer from the Criterion DVD.