You Will Meet a Tall Dark Stranger 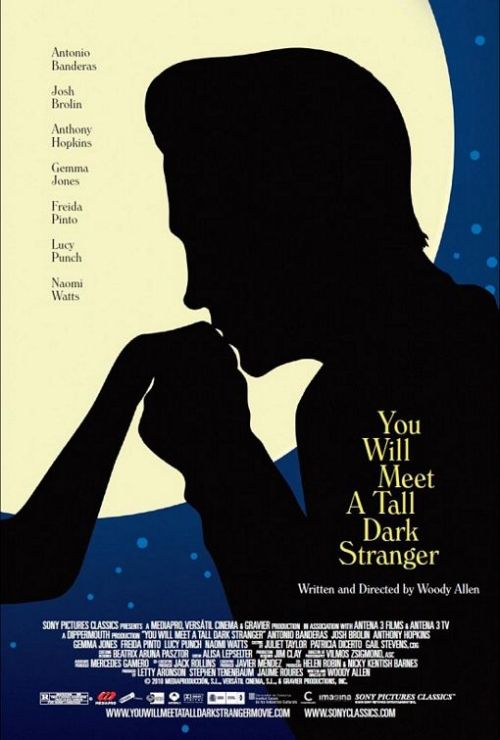 Writer and director Woody Allen’s latest creation, You Will Meet a Tall Dark Stranger, is nothing extraordinary. In fact, I thought it was terrible. I mean no disrespect to Mr. Allen; a fine filmmaker with a long list of accomplishments (Zelig, Manhattan, Annie Hall, Small Time Crooks, and Mighty Aphrodite to name just a few), but his latest effort was stilted and outright boring. The characters were generally unexciting (except Charmaine, who I found hilarious), the dialogue wasn’t very witty, and the narration was awful. When I saw Vicky Christina Barcelona a few years ago I felt the same way – the narration was lazy. Yet Vicky Christina Barcelona was a pretty good film whereas You Will Meet a Tall Dark Stranger wasn’t. Penélope Cruz and Javier Bardem were excellent together; their fights, their banter, their lives were all highly entertaining. The shoddy narration was excusable because these characters were fun to watch. My issue with the narration for Allen’s new movie is the narration seemed lazy. Instead of allowing the film to narrate itself, Allen used an outside voice to keep the movie’s pace – a move that harmed the film more than helped. Is the movie so stilted and uninspired that an omnipresent voice needs to hold the story’s hand, helping it from point A to point B? 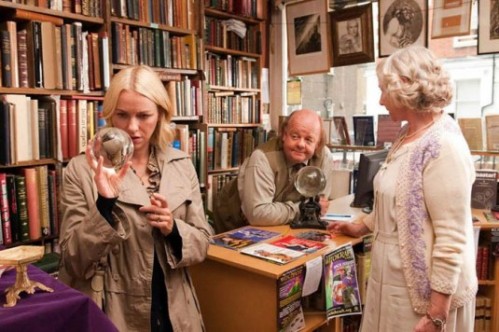 Helena (Gemma Jones from the Harry Potter movies) is the family’s matriarch; a middle-aged divorcee receiving her psychiatric support from a charlatan fortune teller. Surrounding Helena are her ex-husband Alfie (Anthony Hopkins), another middle-ager going through a post-midlife crisis and marrying a twenty something ex-prostitute; their daughter Sally (Naomi Watts), a personal assistant to a gallery owner (Antonio Banderas); and Sally’s husband Roy (Josh Brolin), a failing novelist who also has an unused medical degree. Sally and Roy are financially dependent on Helena, who is a nervous wreck and completely reliant on the advice coming from her psychic, Cristal (Pauline Collins). She’s brutally honest – the reason her husband left her – and she has even attempted suicide following her divorce. Her neuroses affect those around her: her daughter and son-in-law the largest of her targets. Since Helena is the film’s anchor, the lives of the other characters are directly tied into hers. For instance, Alfie’s marriage to Charmaine (Lucy Punch), who is a high maintenance wife with expensive tastes that has Alfie wrapped around her finger, feels the financial pressures of Helena’s alimony. Another example is the psychological strain on Sally and Roy’s relationship, since there’s a great deal of tension between Roy and Helena over his taxed literary career and his constant meandering.

Like most of Allen’s films, I thought the cinematography was excellent and the music choices were, as always, great. I have a CD I picked up from the public library titled Songs That Make Woody Allen Movies Great and the tracks on the disc are all amazing (featuring Billie Holiday, Arthur “Dooley” Wilson, Glenn Miller, Django Reinhardt, and many more). You Will Meet a Tall Dark Stranger features another in a long line of Woody Allen movies that feature great old music from the 1930s and ‘40s. I believe there were a few songs that date a little later, but they all contain that timeless quality of most music from that era. The film also features tracks from Giulia y Los Tellarini, an outfit that also appeared on the soundtrack for Vicky Christina Barcelona and a few pieces of opera (I’m not sure which operas since I’m not very knowledgeable about opera). Unfortunetely, aside from the music and the film’s visual presentation, the rest of the piece just isn’t inspired. I kept looking at my watch, waiting for the film to end. I kept wondering why Woody Allen keeps making films at such a fast pace (usually averaging about two movies a year) and I’m sure it’s because his films are low-budget, relying on dialogue and characters instead of visual effects. They’re inexpensive, which means they’re ultimately profitable, even if the box office receipts aren’t very high. I’m also fairly certain You Will Meet a Tall Dark Stranger was shot digitally, cutting down further on the film’s cost. If this is the case, I’m sure Woody Allen will continue making mediocre films that are caricatures of his previous works, pumped out since it’s inexpensive and his name, along with a cast that look good on paper but not in action, will sell tickets.