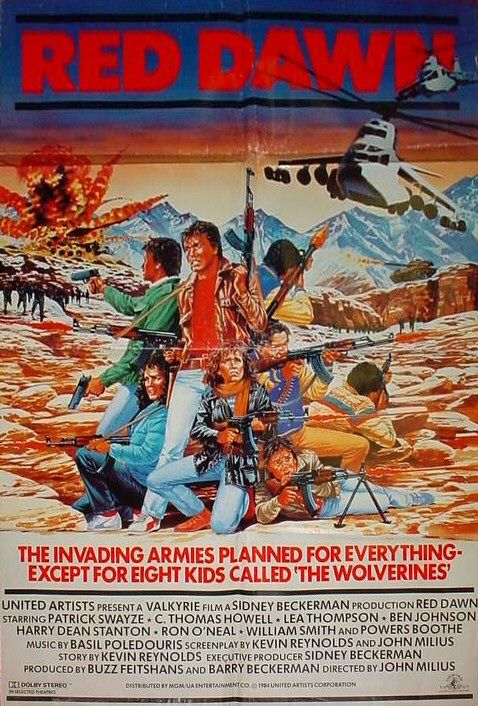 Let me begin this rant by saying Red Dawn is the most unbelievable piece of nonsense to come out of Hollywood in a very long time. Films like Harry Potter are more believable. The beginning of the film asserts everything in Europe and Asia has fallen apart, that NATO’s extinct, and the United States is a lone super power. I’m not saying these things couldn’t happen, but Milius’ pro-American World War III film uses antiquated forms of warfare in a post-war world. With the advent of nuclear weapons, satellite imagery, and all the other military toys on the market (even back in the ‘80s), an old fashioned war (like the first two World Wars) can’t happen. Baudrillard wrote a few essay collected in a book called The Gulf War Did Not Take Place and discusses this. Wars in the classic sense are long gone, replaced by drone warfare and a plethora of other means. Bill Hicks’ description of war on Revelations sums it up best: “you need two armies to have a war.” Our wars don’t exist in this fashion. 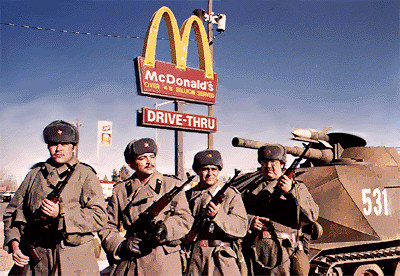 For all of my criticism of Red Dawn, it’s a fun movie. Even if the plot is filled with holes, the sentiments held by many of the characters are valid. The loss of stability, loved ones, freedom are all portrayed wonderfully. When watching Red Dawn it’s easy to empathize with the protagonists, feel what they’re feeling. They’re complex characters, even if acting in a film that’s a pro-American pseudo-science fiction piece. The action scenes are well composed, relying on the anxiety of the situation to make them work. When they’re under fire it feels intense. The guerilla raids performed by the Wolverines are captivating – while you know they’re not necessarily going to do at every turn, there’s a certain sense of apprehension when they’re duking it out with Russians and Cubans. After all, they’re kids, forced into a war. In a sense they were drafted. One scene in particular comes to mind when after months of living in the mountains and attacking the occupying force in a long line of guerilla raids, the Wolverines come out looking for food. They find it, fallen off a supply truck, and are tracked to a long canyon where helicopters attack them, killing and wounding some. They’re desire for food (Cheerios, fruit, Coca-Cola) makes them vulnerable and even though C. Thomas Howell ends up shooting a helicopter with a rocket launcher and dies in a melodramatic last stand, heavy damage is sustained by the ragtag Wolverines. This part, with its location an arid looking desert canyon, reminds me of Afghanistan or Pakistan, where Islamic rebel groups hide from drones and other American attacks. 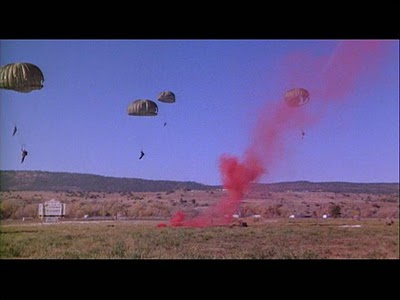 The film’s main characters, brothers Jed and Matt Eckert (Patrick Swayze and Charlie Sheen), come across in the beginning as jock douche bags until they’re placed into an impossible situation. At the beginning of the invasion they show that they’re just American kids, scared and not mature enough to deal with the situation they’re placed in. It reminds me of the current military conflicts America’s engaged in: filled with scared teenagers raised on MTV and packaged food. They’re young and inexperienced, thrown into a war they didn’t ask for or really know that much about. I stated earlier that Red Dawn is an enjoyable piece of Cold War propaganda, yet Milius’ control of the film takes it a little further, exploring the emotions captured during this kind of conflict. For all its silliness, Red Dawn carries a great deal of emotional baggage that caught me, making me feel for the characters and the poor situations they were in.

The film also features Lea Thompson (Back to the Future trilogy), Harry Dean Stanton (Jed and Matt’s father), Jennifer Grey (who was also in Ferris Bueller’s Day Off with Sheen), and Powers Boothe (Deadwood). The final scene in Red Dawn is quite emotional in addition to being well shot and edited. I’m still amazed Milius was able to take a silly idea like Commies invading America and turn it into a heart wrenching war story about teenagers growing up in the middle of a combat zone. The touching last moments between Jed and Matt are quite depressing, which is amazing considering the two actors responsible for the scene. I don’t believe Swayze and Sheen to be incompetent actors, but when I think of Sheen I think of Men at Work and Swayze will always be associated with Point Break to me.