The Road Warrior: A second evaluation and exploration 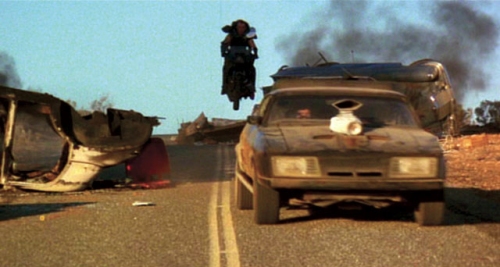 After reflecting on my Road Warrior post last night I realize I failed to explore a major theme. To my credit, I was writing this late at night; I had just pulled double duty, playing drums for two bands in the same evening and I was quite tired. Even though exhausted, I was unable to sleep. That’s what playing drums for over an hour for a crowd and two cups of coffee will do.

The theme I overlooked is the most obvious one: a world without oil – the lifeblood of our civilization. Most everything that makes our modern world modern relies on power, power supplied prominently by petroleum based products. Without this everything stops. Communication ceases, commerce stops dead in its tracks. Even simple activities like cooking dinner becomes difficult, since most of us have electric ranges, rely on grocery stores or markets for our food, and keep it all in an electric powered refrigerator. I’ve heard arguments that our petroleum dependent world maintains the weak, that without modern conveniences we’re nothing; useless consumers. Like the title of Heinlein’s novel, we’re “strangers in a strange land.” 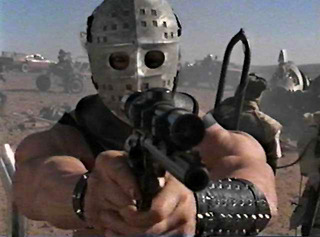 Although predictions are sometimes foolish, the introduction to The Road Warrior is probably accurate. The statement, “without fuel they were nothing. They’d built a house of straw,” sums up our society nicely: we’re cut off, turned off when the “black fuel” stops powering our daily lives. It’s in the things we use all day, it’s what powers what we do all day; it’s in our food, our phones, our clothes – everything. The plastic universe depends on it and we depend on the plastic universe. Without it our identities crumble, since our identities are predicated on living in a world rich with the “black fuel.”

This idea is the center of The Road Warrior. When the weak are without their drilled manna those willing to implement brute force take control. Some believe brute force isn’t possible anymore and in regards to the world we reside in they’re correct. Take away the structure and all you have is brute force. The Construction of Social Reality by John Searle (not to be confused with The Social Construction of Reality by Berger and Luckmann) discusses brute force, or as he puts it “brute facts,” as ontologically objective. Searle’s assertion is that a naturally existing object, like a mountain, exists regardless of the human awareness of such a structure. Our name for the object (in this case, mountain) exists outside of the objects actual existence. If humans die tomorrow, the mountain will still be; the name will disappear, but the object will still exist. This might be the case in regards to brute force – if our society, which is the structure keeping brute force at bay, crumbles, brute force will reign supreme. It exists with or without a society and since ontology is the study of the reality of substance, brute force transcends both structure and lack of structure.

Maybe I’m talking out my ass here, but it’s entirely possible our existence is predicated on a structure the weak, like myself, cling to. It’s the basis for just about every piece of post-apocalyptic literature and film and although we haven’t put these theories to any test, since this would mean our society is done, our guesses are based on a study of the human condition, the history of humanity, and our basic needs and desires. The most recent installment of Robert Kirkman’s incredible comic book series The Walking Dead (issue #77), Kirkman states how he comes up with the plotlines and character’s actions, solidifying my previous assertion: “I guess it’s just pure observation and exploration of what might happen. I’m just making stuff up, really. I’m not doing a lot of research into human behavior.” Kirkman’s probably not combing the entire works of Freud or Jung to come up with character motivations, yet to quote another comic book (The Uncanny X-Men), “it doesn’t take a crystal ball to predict the obvious.” 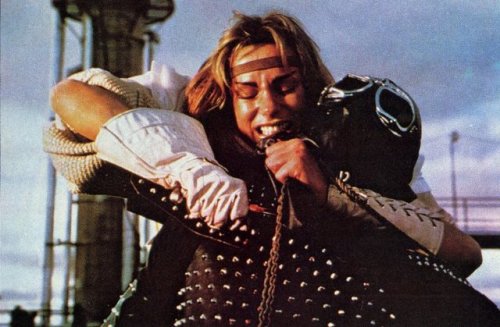 The Road Warrior is a clever film, exploring a world without oil. Like any good piece of prophetic writing, it explores possible outcomes. It doesn’t claim its vision to be the only one, but it’s a voice in a chorus, attempting a dialogue with the viewer that doesn’t necessarily spark a revolution but at least educates or brings about critical thought. It’s also a film; another series of images in a long line of self-contained series’ of images, fueled and funded by industrialization. Ian Svenonius’ assertion in his article The Documentary Crisis that, “film was the industrial era’s contribution to art,” serves as a counterpoint to the notion that film can be a voice for change. I’ve said this before in my writings, but any critique made by film, especially films in the studio system, is within the confines of the system it’s sometimes trying to critique. This isn’t necessarily a negative, but as powerful as any moving image can be, it’s important to remember it’s a story using the ideology of industrialization and capitalism to get its message across. Its Enlightenment thinking – thinking revolving around the notion that the universe is a giant clock, a machine that can be refined and exploited without consequence. Yes, The Road Warrior is criticizing this mentality, but it’s an extension of the very same system it condemns.

Make the decision for yourself. Enjoy the movie, don’t enjoy the movie, or just have a good time. Regardless of its political agenda, The Road Warrior is fun, filled with great car chase scenes, homoerotic clothing, and gratuitous violence. What else, aside from excessive nudity, does an American audience want?