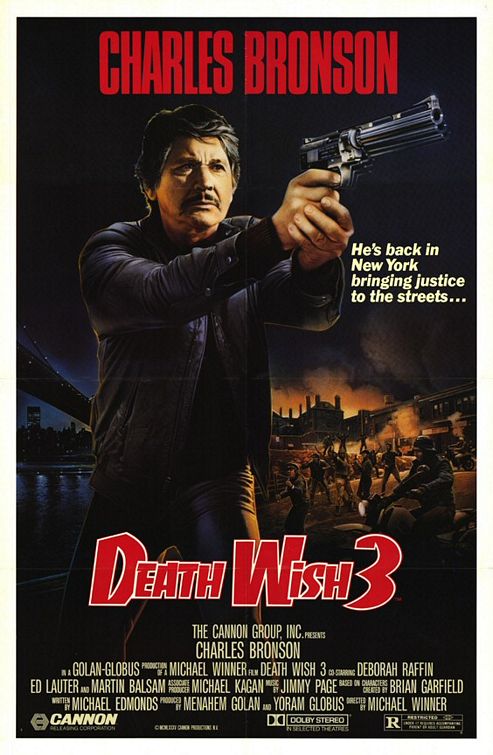 AMC is running a Death Wish marathon this week and the other night I caught Death Wish III, my personal favorite from the series. In comparison to Michael Winner’s 1974 original, Death Wish III is a piece of crap. If you’re looking for a bad ‘80s action film, Death Wish III is probably the best of the bunch. What other film contains a street gang with reverse mohawks?  Yes, reverse mohawks – the middle of their heads is shaved, decorated with a red stripe and two black lines and resembling a cheap cross. It’s a film where the protagonist is a senior citizen, but is capable of killing dozens of people. It also uses the silly music from the second Death Wish film by Led Zeppelin’s Jimmy Page. 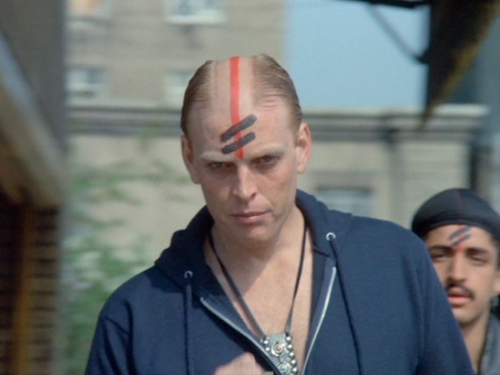 The plot is inane but quickly summarized: Charles Bronson reprises his role as Paul Kersey, a NYC architect turned vigilante following a vicious rape/murder by of his wife and daughter by Jeff Goldblum’s gang in the first film. The second film takes place in Los Angeles and the third film starts with Kersey returning to New York to visit an old Korean War buddy. Upon his arrival Kersey finds his friend killed by street goons, awakening his vigilante tendencies. With the help of a detective who constantly calls everybody “dude,” Kersey uses mail-order weapons to start all out war. Plus, there’s a great part where Bronson shoots somebody with a missile launcher at close proximity and walks away.

Michael Winner, the director of the first two Death Wish films, returns again for a third attempt at the franchise; a decision that was probably ill advised. Winner directed The Big Sleep and The Mechanic, which are two excellent films, yet his career took a nosedive after Death Wish III – which is quite understandable. I don’t want these comments leading to assumptions that I don’t like Death Wish III, but I can’t call it a spectacular contribution to cinematic history. It’s a B-movie, plain and simple. I enjoy this film because it’s so awful, because it’s an example of what happens when profits and Reagan-era ideals interfere with a great film. What made the original Death Wish so good was its grittiness. I don’t necessarily agree with the politics of Kersey – a man who takes matters into his own hands, leading to a body count – but the original Death Wish is a prime example of conservatism gone awry. It’s understandable that somebody who’s experienced the loss of his wife and the rape of his daughter would want to take the law into his own hands when conventional justice fails. Yet, I’ve always believed the setbacks of our system are sometimes necessary in order to preserve something bigger. Then again, brute force does have its positives, even if it’s only a sense of satisfaction. Ultimately, Paul Kersey is a deranged man, just as dangerous as the criminals he kills. I think this is the duality of his character: he is likeable because he is wounded and lashes out, yet his actions, even in the name of justice, are just as misguided as any criminal. In essence, Kersey is also a criminal. 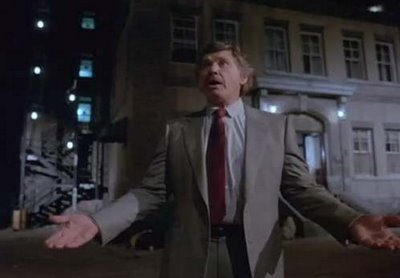 The struggle depicted in Death Wish is long gone by the time we get to the third film in the series. Kersey’s no nonsense approach to vigilantism is ripe with Reaganism; nothing more than fodder for NRA members and lovers of senseless violence. Yet, it does say something about multiculturalism. The street gang Bronson fights not only employs people of all races, but also includes women. For a group of random thugs, they’re quite progressive. However, Winner and the creators of Death Wish III really had their heads up their asses when it comes to popular culture. Who on earth has a reverse mohawk? What street hood would name himself “The Giggler?” Things like this demonstrate Winner’s distance from the youth culture he is portraying, making his depictions come across as nothing more than the ramblings of an old man. He might as well had said, “get those damn kids off my lawn!”

I guess this disassociation from youth culture makes sense since Bronson was 64 years old when the film premiered in 1985. What’s irksome though is the treatment of Bronson as a younger lead, with a large amount of close-ups and shirtless scenes. Bronson even manages to get laid by a woman in her late 20s or early 30s, a scene which is hilarious. Thankfully the act itself isn’t shown, but watching a woman’s lips touch Bronson’s senior citizen mustache is a little bizarre. I can’t help but believe scenes like this, incorporated with Bronson’s countless murders, are a leading example of an old man’s fantasy brought to the silver screen. What elderly man doesn’t want to couple with a young woman and blow away young people, especially those youths responsible for making their lives difficult? It’s truly a film inadvertently discussing the struggles between the ages. 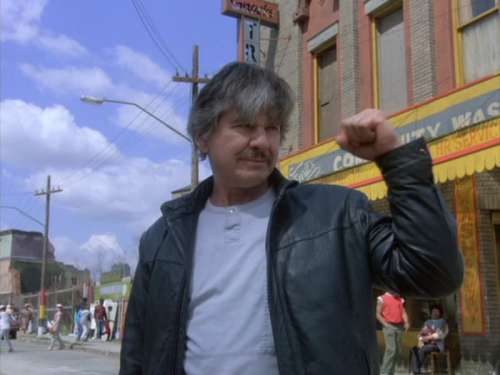 The film also features Alex Winter (the Bill and Ted movies, Freaked), Martin Balsam (Psycho, Mitchell), Ed Lauter (Cujo, The Longest Yard) and a lead bad guy named Manny Fraker (Gavan O’Herlihy, who was on Twin Peaks twice). There’s so much more to say about this film, yet it’s hard to describe. Death Wish III is truly something that needs to be experienced. Lines like, “bitch, I’m gonna eat you,” or “They killed the Giggler, man,” really don’t translate to the written word. The lines, delivered by a somewhat incompetent cast, really make this film shine. Also, these lines really need to be seen in context or the impact is lost. As I said before, it needs to be experienced for the full impact of this fantastically awful film to sink in.

IMDB states the film was profitable, costing around $9 million to produce and grossing over $16 million. I’m surprised the film made that much, especially when movie tickets were about half of what they are now, yet there’s a good portion of the American public that went to theaters for it. I’m not sure why, unless they were either gun nuts or looking for an amazing accidental comedy.

Here is the trailer, which is hilarious. The best line: “In a world gone mad, there’s only one law…his!”