Children of the Corn

As a kid I liked Children of the Corn and I still like Children of the Corn. It’s not a landmark piece of cinematic history but it’s a fun horror flick. Based on the Stephen King short story of the same name, Fritz Kiersch’s 1984 adaptation doesn’t contain the bleak outcome that concluded King’s 10 or so page story, but it does follow along the same trajectory. In a small town in Nebraska named Gatlin all the children kill the parents because of a bizarre pseudo-Christian prophecy. The religious leader Isaac (who resembles Eli Sunday from There Will Be Blood) receives revelations from their supposed deity, referred to as “He who walks behind the rows.” All entertainment is banned and the children aspire to an agrarian lifestyle. One of the little girls in the town has “the gift of sight,” and draws prophetic events. When a young couple (Linda Hamilton and Peter Horner) travel through Gatlin, they are caught up in the religious fervor and marked as a sacrifice for the children’s God. The film is a little formulaic at this point, but the idea of the film is still pretty enjoyable even if nothing revolutionary in film.

What bothers me about Children of the Corn is the impossibility of a town falling off the map the way Gatlin does. A sign for Gatlin states the town’s population is a little over 900 and I’m fairly certain people would notice if something like this happened. Even though the town consists of less than 1000 people, buyers and sellers of food, the phone company, the electric company, water and sewage, tax collectors, and a plethora of other companies and public services would notice that disappearance of the town’s inhabitants. What happens when there’s a census? I understand the town is far from any major highway and the appearance of the Interstate system probably lessened the traffic through Gatlin, but people would notice. If the town had a population of 20 people maybe they would fly under the radar, but even then it’s questionable. Our nation is so interconnected that things like this don’t go unnoticed. The children left one adult alive: a gas station worker played by R.G. Armstrong (Predator among many other films) and his job is to keep people away from Gatlin, yet I question how this man is sustained. How does he eat? If there’s no food coming into the town and their only form of sustenance is corn and the canned food remaining, how long can this old man sustain himself? Too many questions and it’s possible I should just let them go and enjoy the ride. 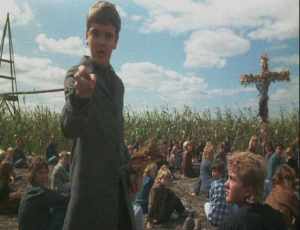 Regarding the film’s ability to scare the audience, it has a few moments that are creepy and unsettling. Isaac’s right hand man, Malachi (Courtney Gains from The ‘Burbs), is genuinely frightening, carrying around a large knife. He is responsible for the murder of a young child named Joseph who is trying to escape the town. The film is rated R but even so none of the children are shown being murdered. Usually the shot cuts away to show blood coming from a dying child, but the actual wound isn’t shown. I can understand that the producers wanted an audience and showing children being murdered would hurt ticket sales and this tactic doesn’t really take away from the film. I’m not a big fan of seeing kids slaughtered so I think I have to agree with the decisions of the producers.

Unlike King’s short story (and this is a spoiler alert for both the story and the film) where the protagonists are killed by the children, the central characters live through the ordeal. Since the film was probably targeting a mainstream audience, there are a few cheesy lines and attempts at humor peppered throughout the film. The really bad ones take place at the end of the movie and the majority of the film is devoid of any corny catchphrases. One of the most notorious lines from the film is Malachi screaming “Outlander” to a hiding Peter Horner; South Park parodied this. Its use by comedic television shows hasn’t taken away from it though and it’s relevant to the film and yet still humorous without subtracting anything from the film’s intentions. Another great thing about the children in this film is the attention paid to their naivety. When Horner is surrounded by a group of children in the center of the town, the children are easily distracted when Malachi yells “Outlander,” giving Horner the opportunity to push through them and get away. Its things like this that show the children are actually lost without parental figures to guide them through adolescence. When I was a kid I always wanted to live in a town like theirs when I would start watching the film and would feel stupid for thinking that by the time the movie was over. I didn’t want to see my parents killed by religious fanatics, but the idea of a real-life Neverland seemed wonderful. Maybe video games have taken away from children ever doing anything like this (if it was even possible to begin with) since things like Call of Duty severely distract.

My only complaint with the film is a small one and has to do with the relationship between Hamilton and Horner, or rather the inequities between them. Horner is a medical student on his way to Seattle to start an internship and Hamilton’s aspirations are unknown. The only thing revealed is that she wants to get married and there are a few instances where Hamilton nags Horton about marriage. So let me get this straight: Hamilton has no visible ambitions aside from marrying a doctor and being a kept woman? What the hell? Talk about a one dimensional character; do the deleted scenes indicate she’s baby crazy too? There are no strong women in Children of the Corn and even when faced with extreme situations both character fall into stereotypical gender tropes – he fights evil and she takes care of the children. The subliminal sexism in the script isn’t as harsh as in many movies but it’s a good example of how male screenwriters insert unbalanced gender roles into mainstream films. Children of the Corn is far behind Hamilton’s portrayal of Sarah Conner in the Terminator films, where she is a strong woman, capable of taking care of herself. Towards the end of the film Hamilton does figure out a religious passage so Horner can combat the monster, but isn’t this stating that women like religion and parenting while men like action, once again placing women in a subordinate position?

Box Office Mojo reports the film made a little over $14 million dollars and I can’t see the film costing more than a few million to produce. Aside from R.G. Armstrong, the other actors were virtually unknown at the time. While Hamilton gained notoriety from The Terminator and both were released in 1984, Children of the Corn hit theaters in March and The Terminator came out in October. The production value is pretty solid and the construction of the film is good. There are no horribly shot scenes, the editing is decent, the acting is decent (although cheesy at times), and there are no continuity errors that I noticed. Personally I like the aesthetic of horror films from the 1970s and ‘80s and Children of the Corn is one of those films that was made at the end of this golden age of cinema. I didn’t write a review of this for Netflix but below is the trailer.

3 responses to “Children of the Corn”